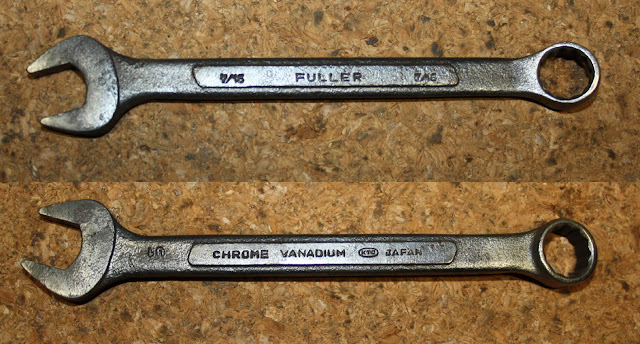 The forerunner of the Kyoto Tool Company was Kyoto Machinery which started out making machines for the textile industry.  In 1939, they were given the job of making tools for servicing the Zero fighter aircraft.  In their catalogue, they claim that they acquired some American socket wrenches as war trophies from the Battle of Midway, and were so impressed with their "superior functionality" that they became determined to make even better tools. 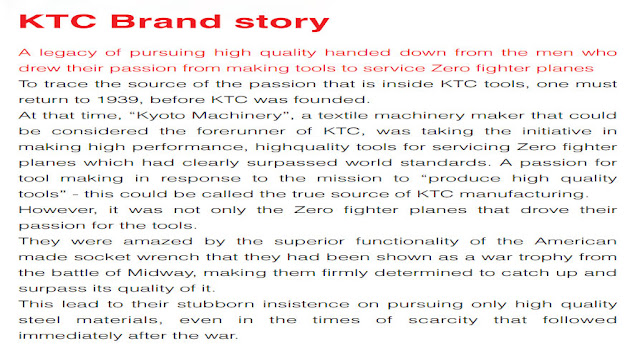 (Of course, the Battle of Midway was a carrier battle in which the Japanese carriers were trounced.  At no point where the Japanese in a position to take "war trophies" from any of the American planes or ships.  They must have encountered American socket sets long before this, so its curious that they misrepresent this history in their literature.)

The Kyoto Tool Company was officially founded in 1950.  The city of Kyoto was actually Japan's capital for almost 1000 years, beginning in 794.  It was one of the homes of Japan's master craftsmen, "shokunin."  The KTC website adds, "KTC values and respects these traditional cultural values, and as an homage to Kyoto’s traditional craftsmanship we also offer a collection of tools for aesthetic enjoyment."  Kyoto began making tools for Toyota in the 1950's along with tools for the wider market.

In the 1960's, their logo became simply KTC.  In 1992, they pioneered the "Furniture Factory World" as a method of increasing worker comfort while promoting greater efficiency.  They have since launched their Nepros line of high quality tools.  Today they boast on their website that they are Japan's No. 1 tool maker.  (They carry an impressive line of motorcycle specialty tools, including full tool kits!)

In the late 1930's, Bernie Fuller founded a small wholesaling and manufacturing company out his garage in Whitestone, in the borough of Queens, New York City.  There, he produced screwdrivers, nut drivers and wood chisels.  He actually began by hawking his wares to passengers on the New York City subway. In 1944, he expanded to a Montreal operation under the supervision of brothers Stanley and Lloyd Davis.  The company's original motto was "Professional quality at a home owner's price."  During the 1950's, the product line was expanded to include a complete range of pliers along with adjustable wrenches.  In the 1960's, Fuller made an arrangement with the Kyoto Tool Company (KTC) of Japan to distribute their tools in the U.S. 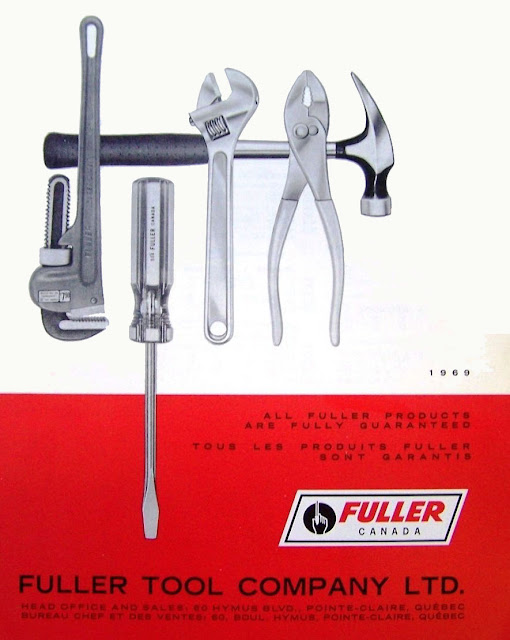 Further expansion of the company's offerings took place during the 1970's when many of their tools were offered through the Eaton's catalogue.

In the early 1990's, the head office was moved to Montreal in Canada, with manufacturing consolidated in the Montreal plant. Below, a Fuller Canada screwdriver:

Today, the company offers over 1500 items.  It is now part of the Innovak Group out of Pointe Claire, Quebec, which in addition to Fuller includes Johnson Level, General Tools, and Wavex, a new line of shock-absorbing hand tools. 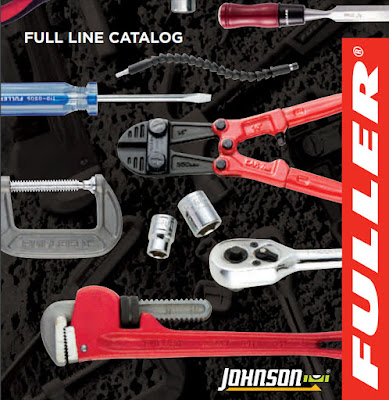 
All this is untrue. My dad starting Fuller Tool Co. In a factory in the Bronx,NY. Later moving to a large plant in Whitestone, NY.
Our home was in Jamaica, NY and he never operated out of our garage.

Where did you get such falsehoods!

This piece was originally written by The Duke, who passed away earlier this year.

The article notes that early production was from a facility in Whitestone, NY. Published company history at http://www.fullertool.com/pages/eng/about.php. The original published assertion that Bernie Fuller operated from his garage and sold his wares in the NY subway system is available at: http://www.johnsonlevel.com/files/manuals/Fuller%20Catalog_08.pdf. So that is likely where some of these disputed points would have originated. Sometimes companies take liberties with a story to make the characters or products seem more relateable. Apple Computer started off as garage based businesses, right? Since you would be privy to more intimate knowledge of the man, why don't you use the opportunity to tell us all something compelling about Bernie Fuller that can't be found online? His passion for quality workmanship? His dedication to his work? Some of his meaningful endeavours that are not generally known? This site is populated by people who appreciate well made things and those responsible for sharing them with us. Thanks!