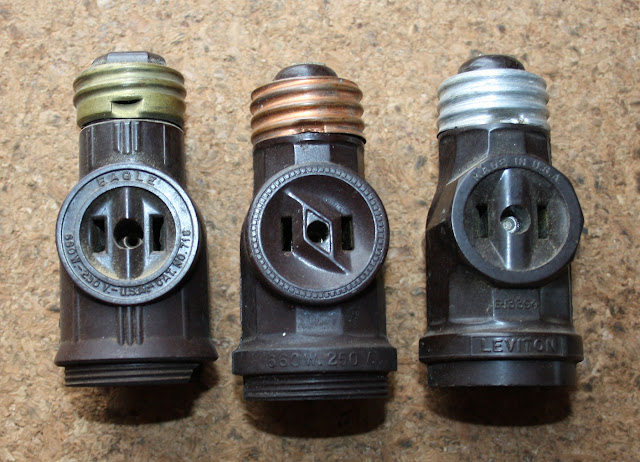 Above, three different socket adapters, made in the days before 200 amp services, when you needed to use a light socket as an available source of electricity.  Notice that one on the left is marked "Eagle."

Below, a bakelite plug made by the firm, with lovely detailing from a bygone era: 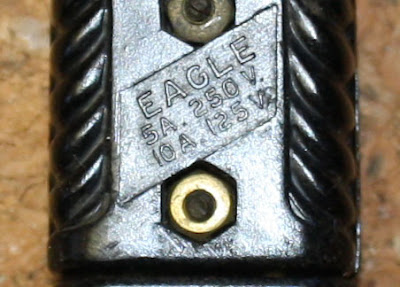 The Eagle Electric Manufacturing Company was founded 1920 by two brothers, Louis and Philip Ludwig.  The company made a variety of electrical devices such as switches and outlets to serve the growing electrical market.  The company eventually expanded to a number of buildings across the city but their landmark was Plant No 7 which had a giant neon billboard overlooking the Queensboro Bridge which read, "Eagle Electric--Perfection is not an accident."  The motto was attributed to Louis Ludwig.

In 1991, the company introduced the first surge protector wiring devices under the eSmart brand, the first trademark with an "e" in front of it.  Although it sold very well in the big box stores, the company's marketing director discontinued it in the belief that computers were just a fad.  Production began moving out of New York to Greensboro, North Carolina in the early 1980's, and later to Mexico.  However, the Queen's factory remained in operation until 2000, when the company was bought by Cooper Industries to form Cooper Wiring Devices.  The new company executives were persuaded to remain in New York by tax abatements and labour concessions, but the ax dropped the following year.  As of 2006, Cooper Wiring Devices had moved all of their manufacturing out of Long Island City to Mexico, China and the south-east U.S. The factory building has been converted to residential lofts, and the sign was first darkened and then removed. (The Cooper Hand Tools Division joined with the Danaher Corporation in 2010 to firm the gigantic Apex tool group.)  In 2012, Cooper Industries was acquired by the Eaton Corporation, an even bigger multinational.  (I direct readers to Jeff Nielson's series, "Big Business is economic cancer.")

Ironically, the company name survives in the Philippines:

They still take as their motto, "Perfection is NOT an accident." Nowadays it seems that you have to travel outside of the U.S. to encounter sentiments like that.

Just had to replace s ball chain socket in the closet. I looked at the beautiful composite molded plastic body that was a mix of brown and white and saw the Eagle logo. So I did a little research and found this blog. Thanks for filling in the history. The replacement I found is plain brown plastic, stamped Mexico with no logo.