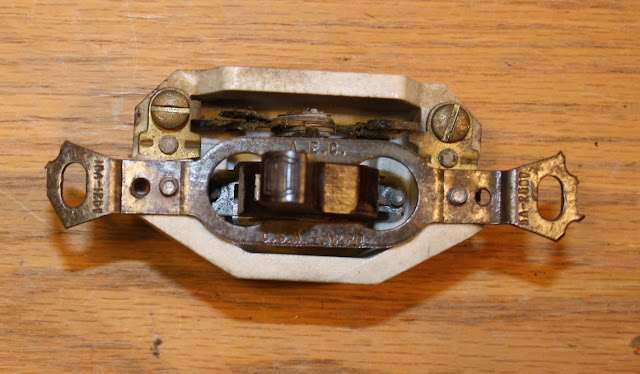 Above, an old light switch made by AEC.  The company was incorporated in 1929 to acquire the assets of three companies including W.H. Banfield & Sons Limited, which made machine tools, sheet metal stampings, power presses, pressed steel parts, spun and stamped brass goods, electric fixtures and fittings and, later, phonographs. (For a full history of this company, visit the Canadian Antique Phonograph Society.)

Federal Pioneer itself has had its up and downs.  It was originally incorporated as Pioneer Electric Limited in Manitoba in 1946. The company changed its name to to FPE-Pioneer Electric Limited effective in 1964. The company then changed its name to Federal Pioneer Limited in 1972. Federal Pioneer Limited was incorporated in Canada in 1978; all shares were acquired by Schneider Canada Inc., a wholly owned subsidiary of Schneider S.A. in 1990.  In 1995, Pioneer Transformers Ltd. was bought from Group Schneider.