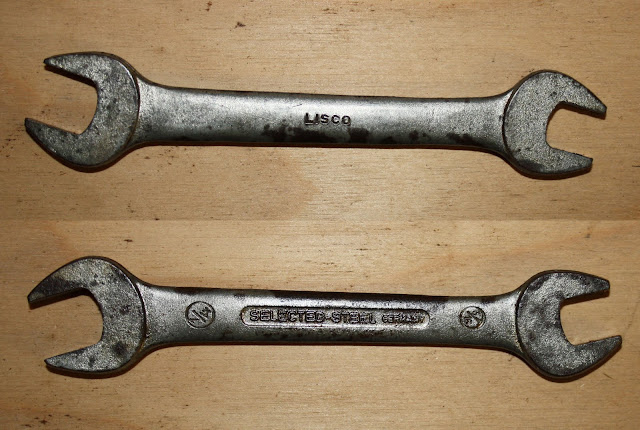 This oddball German-made SAE wrench turned up from somewhere.  The only reference to Lasco Germany I can find relates to the LASCO Umformtechnik GmbH which today produces a host of forged materials including pistons, connecting rods, crankshafts, axles, and valves to the automotive industry.  It has subsidiaries in the U.S. and in China.  It also has an interesting history.

In the middle of the 19th century, the Duchy of Saxe-Coburg-Gotha was a member of the German Confederation, a loose amalgamation of states consisting of 35 principalities and four free cities.  The German Empire would not rise before 1871. Length was measured in “Rute”, “Fuß” and “Zoll”, and people paid with “Gulden”, “Thaler” and “Silbergroschen”. The majority of the population worked in agriculture and skilled crafts and trades.

The company initially specialized in waterwheels, turning to water turbines in 1869.  Later they built steam engines and internal combustion engines and, in the 1880's, added drop forgings to their product line, largely to supply the weapon and tool factories in South Thuringia. After Louis Langenstein’s death in 1884 and Ludwig Schemann’s death in 1886, Louis’ son Carl Langenstein became the Managing Director and also acquired the company shares of the Schemann family after the Schemann widow’s death.

LASCO Umformtechnik GmbH still manufactures machine tools and production facilities and to this day is still largely the property of the founding family Langenstein and is based in Coburg (Oberfranken).

I can't find any reference to hand tool manufacturing, though. Even if they didn't make my wrench, it still makes for interesting reading.