We used to make things in this country. # 248: Canadian General Electric, Toronto, Ontario 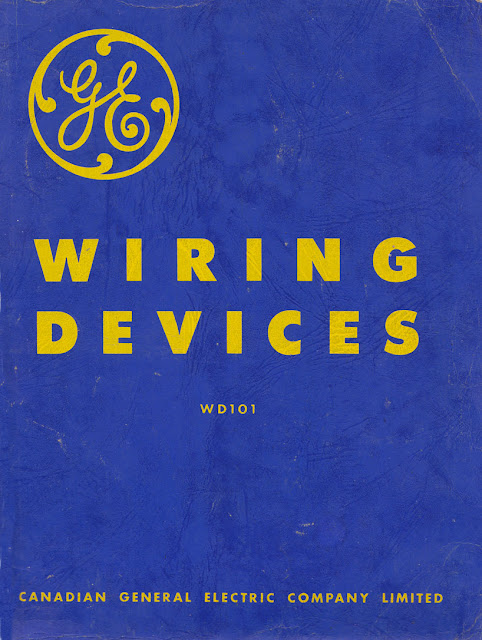 Above, my 1960 CGE catalogue, when the company was located on Lansdowne Avenue in Toronto. 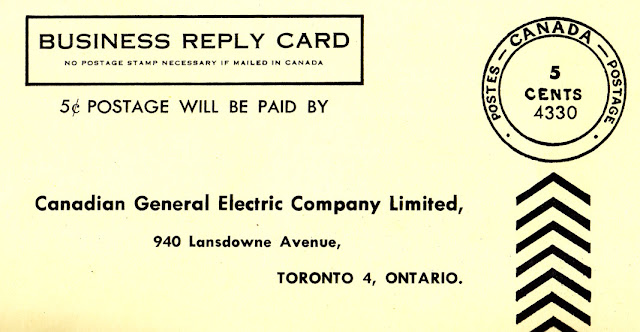 Below, switches back in the day.  "Modern push-action switches operated at the push of a finger or a gentle wipe of  an elbow." Making switches quieter was a big issue, apparently.  Also, switches were marked to indicate whether they could handle the amps of tungsten-filament incandescent lamps (T), or inductive loads from fluorescent lamps (L). 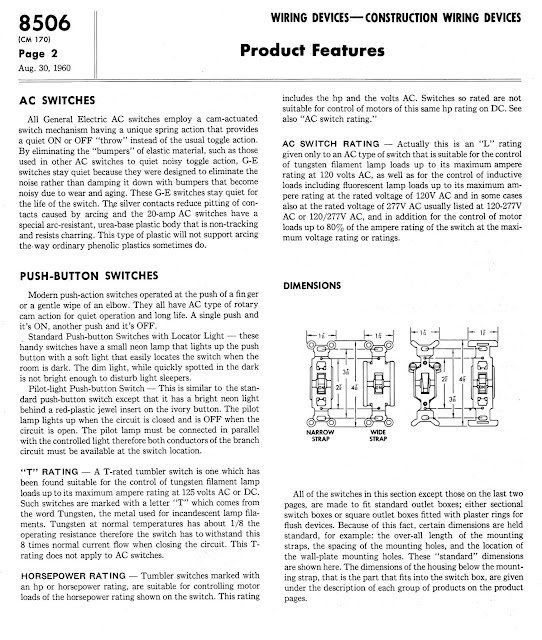 You could even get switches with a "quiet pool of mercury" for even greater silence, and damn the toxicity! 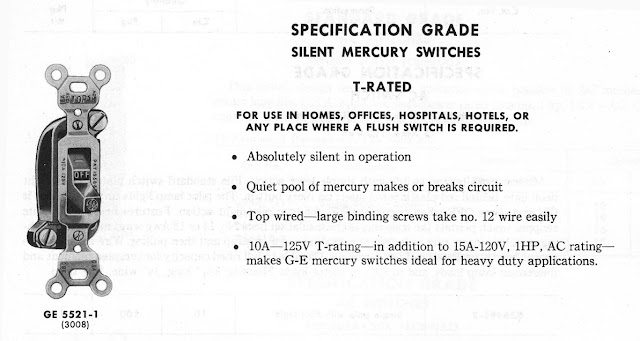 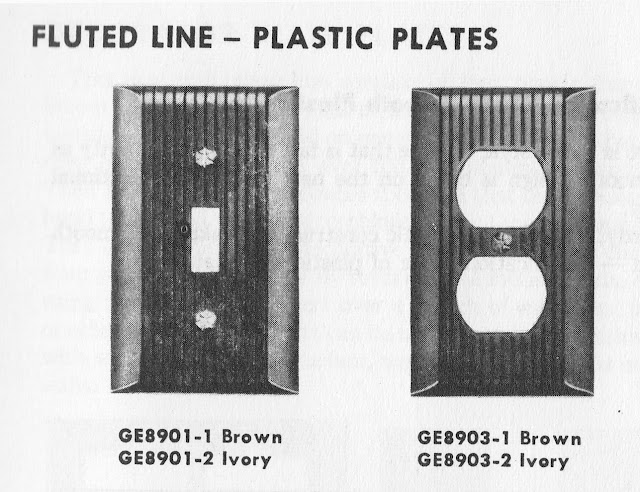 Before this, switch and outlet plates came in a variety of attractive designs, some even with maple leaf designs in the corners.  Below, from my small collection: 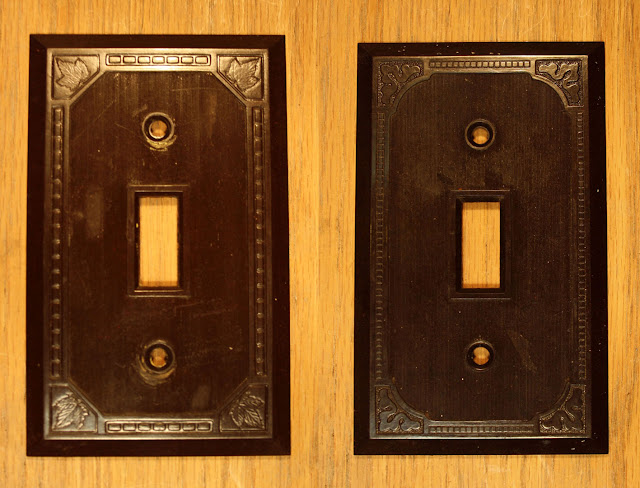 (The switch plates above are actually from the American 1930 Arrow-Hart & Hegeman catalogue): 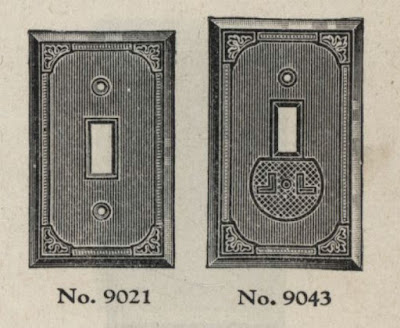 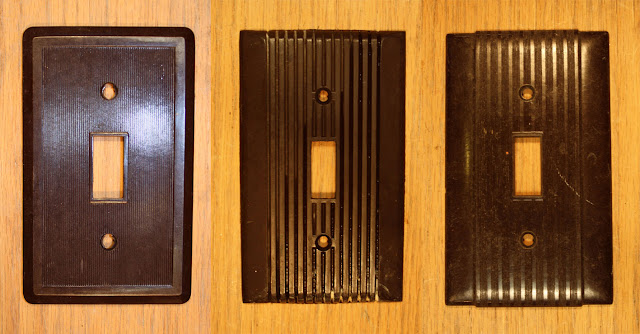 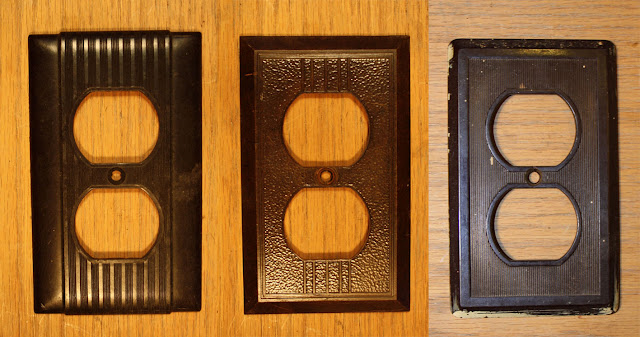 The boring plain ones available now seem to have been introduced in 1960, "it's [sic] smooth design (is) based on the new concept of functional beauty."

Below, another thing the company used to make:  a door bell: 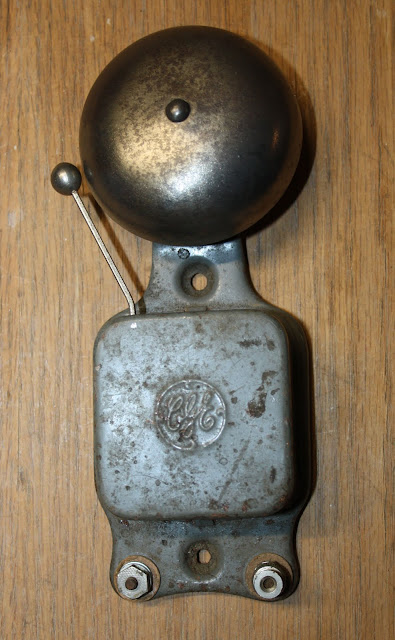 Canadian General Electric (CGE, also known as GE Canada) was a Canadian manufacturer of various electrical products. CGE was incorporated in Canada in 1892 as a merger of Edison Electric Light Company of Canada (of Hamilton, Ontario) and Thomson-Houston Electric Light Company of Canada (of Montreal), both incorporated in Canada in 1882. The Canadian merger occurred in the same year as the merger of parent companies Edison General Electric (of Schenectady, New York) and Thomson-Houston Company (of Lynn, Massachusetts) into General Electric.  The parent American company was a powerhouse, receiving patents for the first electric fan (1902), the first electric range (The Hotpoint, 1910), improvements on vacuum tube designs (1912), having its transmitter used one of the first radio stations in the US, WGY in Schenctady, New York (1922), then the first television reception fromn GE's WGY in Schenectady (1927), the fluorescent lamp (1938), the first American jet engine (the I-A, 1942), the world's first licensed nuclear power plant (Valecitos, California, 1957). The company even had a computer manufacturing division called General Electric Information Services which made general purpose computers, but this division was sold it to Honeywell in 1970.  In 2007, GE acquired Smiths Aerospace.

The Landsdowne Avenue complex (known as the Davenport Works) started out as the site of the Canada Foundry Company.


These warehouses are part of the original 60-acre foundry site, which includes the derelict but impressive former powerhouse, and a well-maintained office building, along with a smoke stack that once competed as one of the tallest structures in Canada.

The history of these buildings starts in Old Toronto, at 206 Front Street East. From at least 1872, William Hamilton manufactured railway cars, cast iron pipes for water, and related metalwork at the St. Lawrence Foundry on Front Street East. In 1900, the company was sold and became the Canada Foundry Company Limited. In 1903, after changing owners yet again, the Foundry set up shop at a new, spacious location in the town of Toronto Junction, at 940-1100 Lansdowne.

The Canada Foundry manufactured steel and cast iron items: railway tracks, bridge parts, fences, staircases, and fire hydrants – if you happen to spot one of Toronto’s antique fire hydrants, odds are it was produced here. The Foundry also made more whimsical objects, such as over-the-top Edwardian decorative dragons designed by architect E.J. Lennox, now encased in glass in the lobby of Old City Hall. These “grotesque animals” (as the catalogue called them) disappeared after an ill-planned City Hall renovation, but in the 1990s they were found and returned to their former location. Old City Hall’s spiky dragons, along with its elaborate staircases and original elevator cage, are surviving reminders of the delicate workmanship that once issued from the massive Davenport and Lansdowne site.

The Canada Foundry was perfectly located among other factories along Royce Avenue (now called Dupont Street). The neighbourhood’s companies manufactured every part of the early 20th century’s mechanized dream, from railway tracks to engines, radiators, grinding wheels, and gears, all conveniently located near the trains themselves.
In 1923, the Foundry was sold to Canadian General Electric and began manufacturing electrical transformers. In a 1998 article for Taddle Creek, the Toronto Star journalist and editor Alfred Holden describes these behemoth transformers as “weighing up to two hundred and thirty tons, whose cores and coils could be hung like mere meat on hooks and jigs from the factory’s beams.” The transformers had to be shipped out on specially-equipped flatbed trains.

The transformers had a lingering impact on the elegant warehouses of the Foundry site: when the last functioning section was closed in 1981, the site became known for complex PCB contamination. Through the 90s, the warehouses were essentially abandoned, while GE struggled with legal issues in cleaning up the site. The company is rumoured to have spent $20 million on decontamination and toxin removal.

By 1990, Toronto City Council was already considering the site as an industrial heritage site; by 2004, the former old office building and the powerhouse were designated. In 2008, the building at 1100 Lansdowne was classified under the Ontario Heritage Act.

These heritage designations came just in time, as Burka Varacalli Architects worked on preserving the warehouse building for the Foundry Loft conversion. Today, the southern buildings remain untouched, as planning and permissions continue to be worked out. But the upper warehouse has become a successful loft conversion.

Other traces of the Canada Foundry survive outside. The south-end lofts look out at the still-standing smokestack, once claimed as the 2nd highest structure in Canada. Local residents and new loft owners were irate when one developer’s plan suggested tearing down the chimney. Now, the smokestack is staying, on the edge of the park currently in process, on the west side of the development. There’s a rumour that the southern warehouse, currently empty, will be dedicated to retail, which could have a positive impact on the area.

Below, the CGE factory complex in Toronto as it is today, courtesy of Google Streetview: 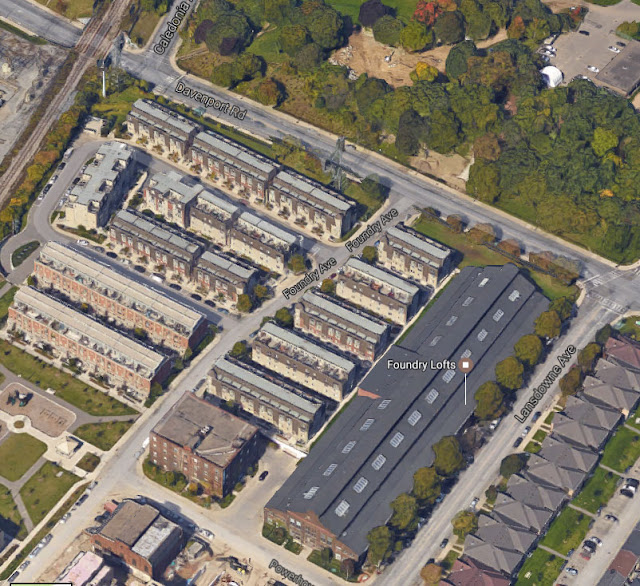 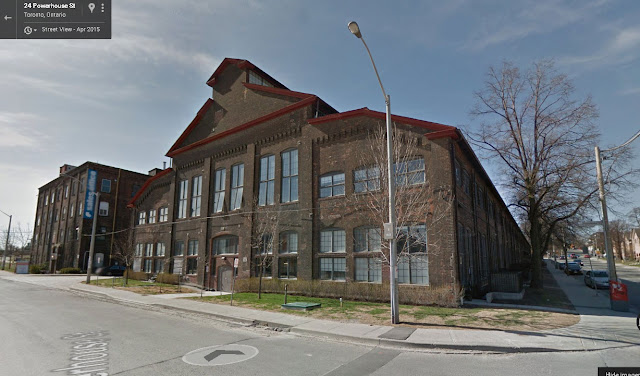 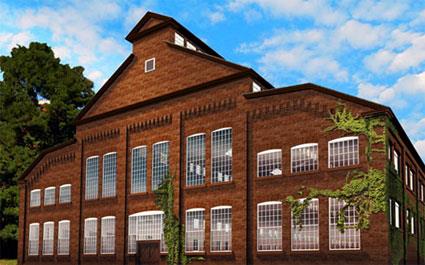 According to a 2011 City of Toronto Staff Report:

CGE also had strong presence elsewhere in Toronto.  Their head office at King Street West and Simcoe Street is designated an historic building.

The Toronto manufacturing has gone but happily the buildings remain.
Posted by The Duke at 9:25 AM