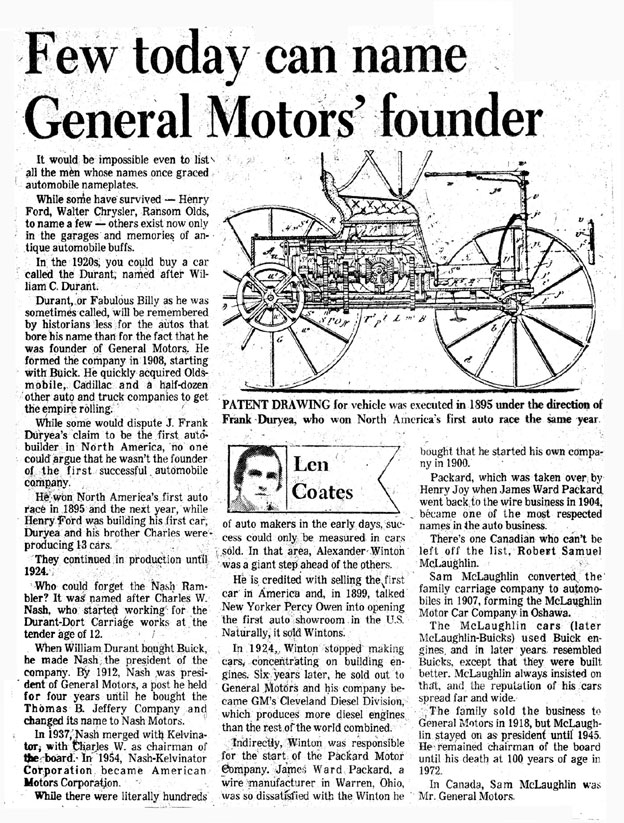 Len Coates (1937-2006) covered motor sports for the Toronto Star for many years. (In 1986, he wrote an article about Canada's first car-- the ‘Steam Buggy’ that watchmaker Henry Seth Taylor  of Stanstead, Quebec built in 1867 – two decades before Karl Benz invented his Patent Motor Car.)  He was instrumental in founding the Canadian Motor Sport Hall of Fame.

According to his obit:

His career took a fast turn when Mosport Park approached him to do public relations in the heyday of Can-Am and Formula One racing there. His charm, wit and knowledge of the sport helped him garner media coverage -- as did his penchant for facts and clever lead paragraphs.

Len was hired to promote Canada's fastest rising motorsport star, the late Gilles Villeneuve, whom he considered the best "natural" motorsport talent of that era. Villeneuve also provided Len with several hair-raising high-speed runs through twisty streets in Italy as Gilles slid his blood-red Ferrari around corners as the locals cheered him on.

Len was in the process of writing a Villeneuve book when Gilles was killed in a tragic motorsport crash. It was a book Len never completed although he tried several times to bring himself to the task. He had already self-published a book titled Challenge! The Story of Canadian Road Racing in 1970.

Under the banner Wheels, Len Coates self-syndicated his automotive writings to a number of Canadian papers. By 1985 he was editor of World of Wheels magazine, the largest circulation Canadian automotive journal of the day. He had, by then, helped found the Automotive Journalists Association of Canada and received its lifetime membership status. Yet he extended his career for one more quest, as copy editor at the Globe and Mail Report on Business.

Just a few weeks before he died, Len was again honoured as the first recipient of an award from Automotive Journalists Association of Canada that will bear his name. And on the day of his memorial service, it was announced at the Canadian Motorsport Hall of Fame banquet that an award in his honour would be created.

I can't find any information that the Motorsport Hall of Fame followed through with its promise, but in 2010 the Journalists Association founded an annual $2000 Len Coates Automotive Journalism Scholarship at Carleton University in Ottawa.  He is also remembered today through an award at Ryerson University's School of Journalism in Toronto.