This particular smooth operator is a Billings Model A Adjustable Bicycle Wrench. According to the November 1878 edition of American Machinist, the wrench was drop-forged from Norwegian iron and bar steel that was then case hardened. The tool was patented on February 18th, 1879 by the designer, Charles E. Billings, as proudly engraved on the head of the wrench.

Born in Weathersfield, Vermont, Charles Ethan Billings earned his chops at many of the burgeoning machine shops that had sprung up in the area.  He apprenticed at the Robbins & Lawrence factory and armory in Windsor, Vermont before moving in 1956 to the Colt armory in Hartford, Connecticut where he became an expert in drop forging.  In 1862 he took his drop forging expertise to Remington & Sons.  During the American Civil War, he was the superintendent of the Weed Sewing Machine Company.  Then, in 1868, he joined the Roper Repeating Arms Company where he worked with Christopher M. Spencer.  When Roper failed in 1869, Billings and Spencer became partners in their own endeavour.  Four years later, they became the Billings & Spencer Company and expanded to the production of hand tools, particularly adjustable wrenches (and their smaller versions, "bicycle wrenches").

According to Legacy in Steel (which has some great paintings and photos of the factory), "In time the plant grew to cover the better part of a long city block at Russ and Lawrence streets in the city’s Frog Hollow neighborhood. The heat of furnaces, the steady drum beat of drop forges and the constant stream of smoke from multiple stacks testified to the success of the partners’ vision."

By the turn of the century, that had become one of the largest tool makers in America, in addition to providing other industries with drop forges. 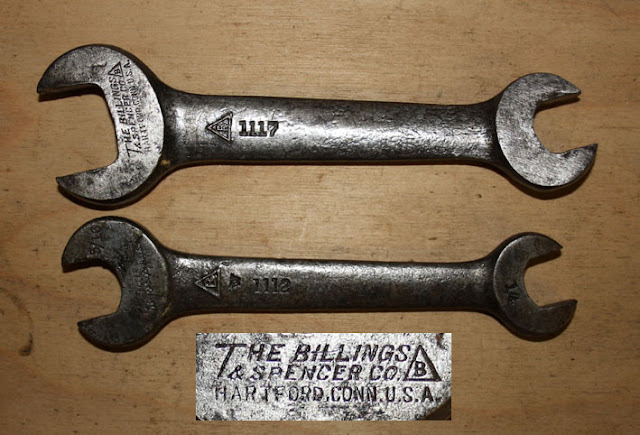 In the early years of the new century, the company expanded to England:

The company's decline began in the 1920's, when they became out of step with more recently developed tool-making technologies, particularly the use of alloy steel.

They corrected this to some degree with their "Vitaloy" steel introduced in the late 1930's.

They absorbed Bemis & Call in 1939 which included the famous Coes monkey wrench.  In the early 1950's, they picked up Peck, Stow & Wilcox (Pexto).

Their turn came in 1962 when they were bought by Crescent Niagara, joining Crescent Tools and subsequently Barcalo and the Bridgeport Hardware Manufacturing Company under the new corporate ownership.  For a while, the Billings name persisted (with the B-Triangle marking removed) but then disappeared altogether. In 1968, Crescent Niagara was gobbled up by the Cooper Tools conglomerate, which in turn later morphed into the ginormous Apex Tool Group.

Below, the scattering of Billings products in my collection. Amazing to think that such a tool-making powerhouse could have disappeared as it did. 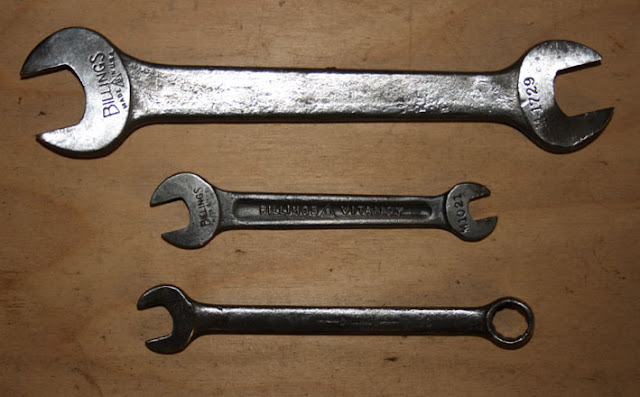 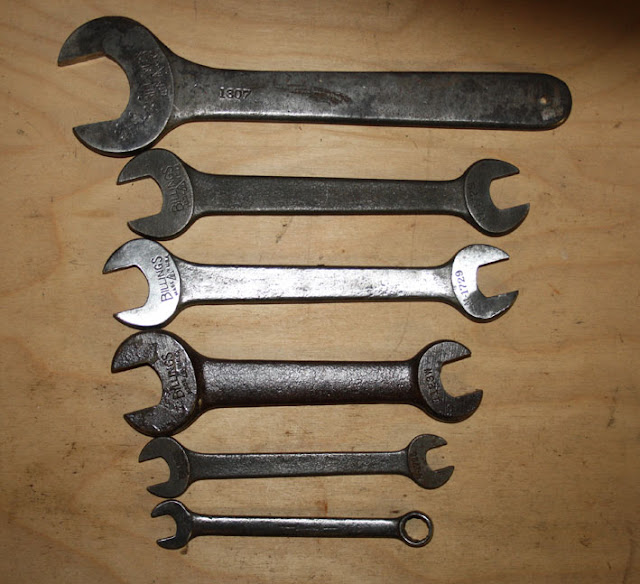 Now for the good news.  The surviving original Billings & Spencer buildings are not abandoned, but rather home to Billings Forge Community Works, an innovative organization providing job assistance and training, plus agricultural, culinary and cultural offerings, among other services.

I didn't happen to notice in your article, but were you aware that a Billings open end combination wrench 1' & 1 1/8" - stamped 634 and SPECIAL were included as tools for the McCaa Breathing Apparatus (named after G.S. McCaa, the apparatus' inventor) is a rebreather system developed by Mine Safety Appliances in the early 1920's. https://gasmaskandrespirator.fandom.com/wiki/McCaa_Breathing_Apparatus