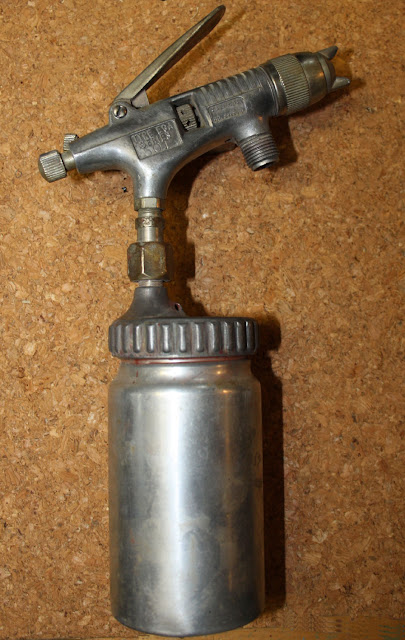 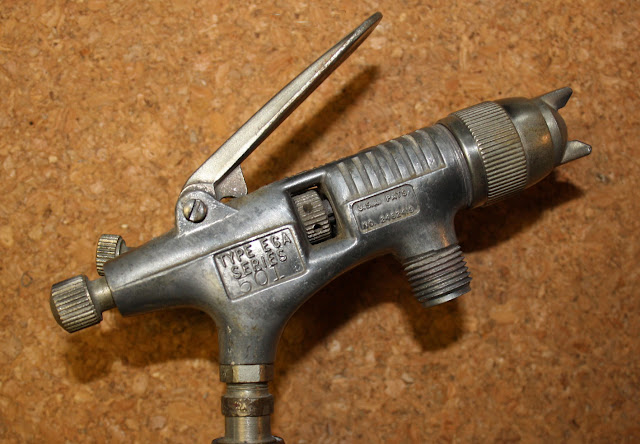 In 1888 Dr. Allen DeVilbiss was a physician practising in Toledo. Ohio.   In an effort to devise a better way to apply medication to his patients' throats, he experimented with a bulb, tubing and the base of an oil can to create the first atomizer. He subsequently formed the DeVilbiss Manufacturing Company and by 1890 was able to retire from the practice of medicine to concentrate on the new endeavour. His son Thomas adapted the atomizer to create a spray gun, which was subsequently marketed as a perfumizer.  (The older son,  Allen, Jr. invented a springless, automatic scale in 1897, establishing the DeVilbiss Scale Company a few blocks from his father's company. A couple of years later he sold the scale company, and the name was changed to Toledo Scale.)  With the coming of mass production, the DeVilbiss spray gun was quickly adapted to applying paint and lacquer to furniture and cars, since the sprayed coatings dried much more quickly than when applied with a brush.  In 1970, DeVilbiss was merged into the Champion Spark Plug Company, and in 1990 was purchased by the Illinois Tool Works (ITW).  In 1998, ITW sold off the industrial air compressor division, which became Devair which in turn appears to have been acquired in 2006 by Garth Greenough & Bogdan Markiel.   In 2008, Graco Inc. paid $650 million to acquire the finishing business of the Illinois Tool Works Inc. which included Binks® spray finishing equipment, DeVilbiss® spray guns and accessories, and Ransburg® electrostatic equipment and accessories.  Most recently, in 2015 Carlisle Companies Incorporated purchased the Finishing Brands Holdings of Graco Inc. for $590 million in an all-cash transaction. So, the former competitors of Binks, DeVilbiss, Ransburg and BGK are now all part of one happy family. 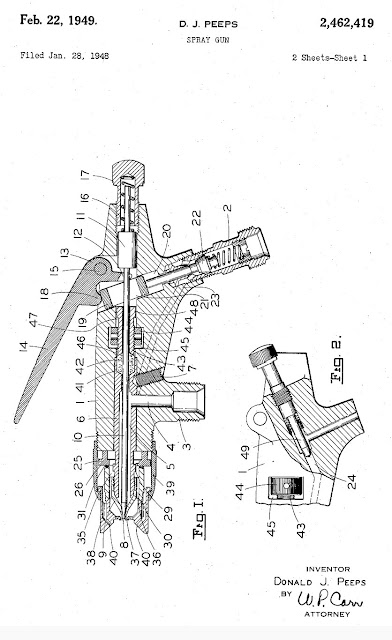 Devilbiss had opened a Canadian plant in Windsor, Ontario but moved production to Barrie, Ontario in 1953 where it had built  a 180,000 square foot facility for the full-scale manufacturing of industrial air compressors, spray guns, and paint spray booths for the Canadian market. When ITW bought Devilbiss in 1990, the Barrie plant became ITW Canada.  The DeVilbiss spray booth division was bought from ITW by Blowtherm USA in 1998, so the Canadian plant became Team Blowtherm.  Team Blowtherm merged with JBI in 2003 to form Global Finishing Solutions.  This was sold to the Curran Group in 2005.  The company closed down the Barrie plant and moved production to Mexico, terminating the entire Barrie workforce.

Anyone in Ontario who has a cottage probably drove by the DeVilbiss plant in Barrie hundreds of times. The huge facilities, expansive parking lot bustling with activity, trucks going in and coming out and the grounds manicured like a golf course were hard to miss. Today the building stands empty, the parking lot is cracked and grayed, windows are broken and the manicured grounds are overgrown with weeds and uncut grass. What happened? Where did they go?

For the the complicated answer, read his blog post.   In 2007, the factory and property were acquired by Toronto-based real estate investment firm, Osmington Inc., which also purchased the former Barrie fairgrounds.  The factory was undergoing demolition in 2012. (For photos of this sad sight, visit Flickr Hive Mind.  In 2015, Laurentian University applied to the Ontario government to build a new campus on the location, but the government decided that new post-secondary facilities would instead be built in t York, Peel and Halton regions.  So, the land remains vacant.
Posted by The Duke at 10:21 AM