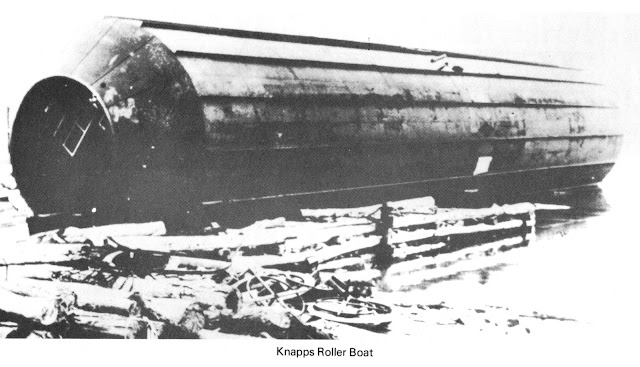 
In the late 1890's a Prescott, Ontario lawyer named F.A. Knapp contracted with the Folson Iron Works in Toronto to build an unusual ship of his own design.  It was a cylinder 22 feet in diameter and 110 feet in length, with both ends tapered to keep water out.  Two 200-horsepower steam engines were installed on a steel platform that rotated on circular tracts around the circumference of the cylinder.  Ribs or paddles were attached to the outside of the cylinder.  The idea was that the engines would rotate the whole cylinder, while remaining upright themselves and that when sufficient speed was obtained the cylinder would roll across the water like a rolling pin over pastry.  Knapp suggested that the engines would act like squirrels running in a rolling cage.  How it was to be steered remains a mystery.

The vessel was launched in Toronto in 1897, watched by thousands of residents.  Unfortunately for Mr. Knapp, the maiden voyage was not a resounding success, as it took almost five hours for the "Roller Boat" to cross one and a half miles of harbour.  Some wag suggested a change of name to "Knapp's Folly" and, to the inventor's chagrin, this became the name by which it was known.

Undeterred (and in fact planning for a entire fleet of such vessels) he managed to convince investors to cough up $105,000 on improvements.  The next summer, it set off towards Prescott at six knots, but ran aground several times and was eventually towed back to Toronto.  For three years nothing happened, and then Knapp decided it should be equipped with a screw at one end, and a bow at the other like a conventional ship.  It was never tested in this new configuration, but instead was left in the Toronto dock where it was particularly apt at tearing loose from its moorings during storms and crashing into other things as it was tossed around the harbour.  During one such excursion, it caused $250 damage to another boat,  and Knapp sold the Roller Boat to scrappers for $595 to pay for the damages. The "floating rolling pin" was never retrieved by its buyer, and eventually it sank at its moorings.  Some accounts say it was eventually cut up for scrap, others that it now lies under the Gardiner Expressway that runs along the lake in Toronto, but there are those who believe that it just rolled away and now lies forgotten somewhere on the bottom of Toronto Bay.

That's the most bizarre design for a boat/ship that I have ever seen!