A Hallowell No. 25 Socket Screw Key made in Jenkintown, Pennsylvania: 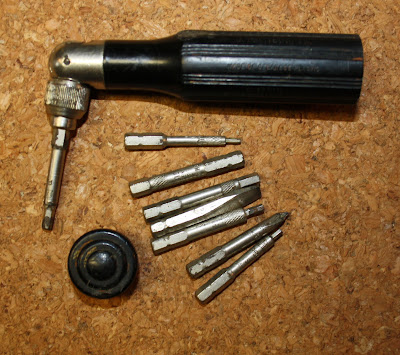 Comes with a selection of Allen bits, and features a 3-position head.

Hallowell was a division of the Standard Pressed Steel Company, which was founded by Harold T. Hallowell in 1903.  The firm began making socket screws in 1911 and further developed socket head cap screws under the Unbrako trademark.  They claimed to have developed the socket screw independently of the Allen company which put out a patent around the same time.  In 1920 they consolidated their operations in one plant in Jenkintown, a suburb of Philadelphia.  The company became SPS Technologies in 1978, and in 1999 developed a stud that could withstand the vibration in engines offered by Polaris Industries Incorporated, vastly reducing warranty claims.  Polaris unveiled their Victory motorcycles in 1998.  Coincidence?  SPS continues as a huge concern today.

The Hallowell trademark was registered in 1955, and expired in 1996.  It was primarily used to market the company's adjustable steel shelving and other office furniture.