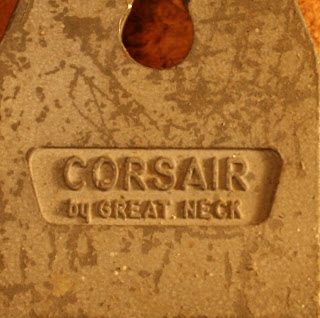 Accurate description, but probably not what aviation enthusiasts were expecting.

Samuel Jacoff and his wife Sarah began manufacturing hacksaw blades in Pitssburgh in 1919.  In 1923, they moved the business to Flushing, New York to get closer to the New York market.  A fire destroyed their factory in 1929, after which they merged with the Great Neck Manufacturing Company in Great Neck, New York.  In 1941, they acquired a Pennsylvania hand saw company, and then moved the entire business to a new plant in Mineola, New York.  After World War II, Mr. Jacoff's four sons entered the business, and the business was further expanded when they bought Buck Bros., a chisel company in Milbury, Massachusetts and Mayes Brothers, a level company in Johnson City, Tennessee.  Mr. Jacoff died in 1971.  The company appears to remain family owned, and is still headquartered in Mineola.

I don't often find Great Neck tools in Ontario, and the ones I have encountered (including the plane above--hollow plastic handles, of all things!) are of middling to poor quality.  The wrenches are particularly shabby.  However, I recently went into a local outlet store and discovered low-priced socket sets bearing this brand name, but unsurprisingly they are made in Taiwan and China.  As Aldo Gucci once said, "The bitterness of poor quality is remembered long after the sweetness of low price has faded from memory."