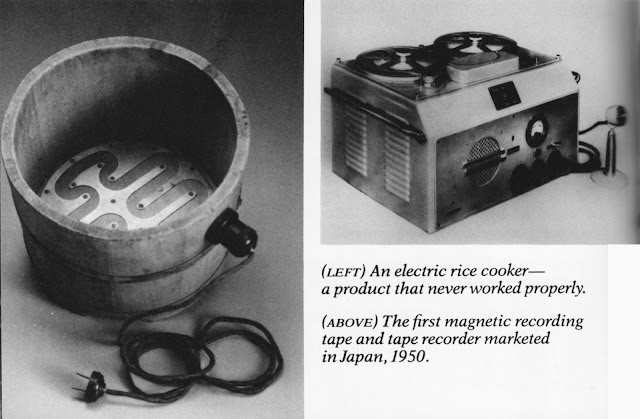 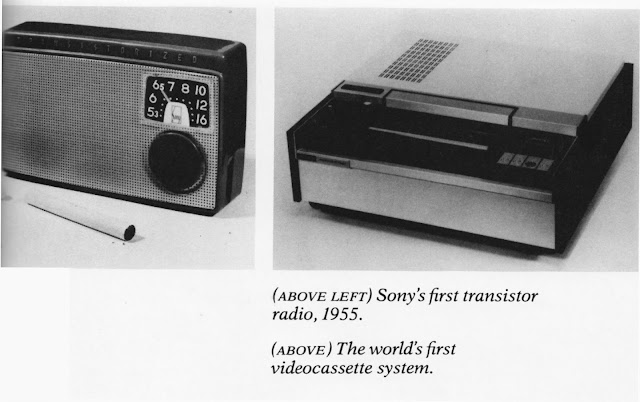 Above photos from Akio Morita, with Edwin M. Reingold and Mitsuko Shimomura, Made in Japan.  Akio Morita and Sony.  New York:  E.P. Dutton, 1986.  This book is a fascinating read, tracing Sony's humble beginnings in bombed out  Japan as the Tokyo Tsushin Kogyo (Toyko Telecommunications Engineering Company) to the international giant it was to become.

Morita explains the many differences between Japanese and American approaches to business philosophy.  In particular, he stresses the importance of mottainai (pronounced "moat-tie-nigh") which "is an expression that that suggests that everything in the world is a gift from the Creator, and that we should be grateful for it and never waste anything.  Literally, mottainai means 'irreverant,' 'impious,' but more deply it carries the notion of sacrilege atainst heavy.  We Japanese feel that all things are provided as a sacred trust and actually are only loaned to us to make the best use of.  To waste something is considered a sin..  We even use the expression mottainai to refer to the profligate waste of something simple, even water or paper."

Amazingly, he reports that no single American company was initially interested in Sony's compact disc player technology.  He adds, "Ironically, some of the technology that made this new recording breakthrough possible was pioneered in the United States, but American companies nowadays seem more interested in service industries than in turning new technologies into attractive products that will be enjoyed by a vast number of consumers.  A theme I feel must be struck over and over again is the danger to America of exporting its production.  Rather than devoting their attention to making products competitive over the long haul, many American managers are still prone to looking for good merchandise at the lowest prices to produce quick profits."

At another point (remember, this was in 1986) he writes, "We Japanese do not feel comfortable with the kind of wide open, frontier spirit deregulation that the United States went through in the early eighties, when banks and savings and loan associations went into freewheeling promotion and many collapsed and the government had to bail them out with public money.  We are also worried about America's over-extension of credit and the huge deficits the U.S. has built up."

Finally, he concludes, "I have written earlier, maybe not with too much sympathy, about how many American businessmen must run their businesses with greater and greater profit foremost in mind, always with the fear that their stock price may drop if their quarterly dividends do not show constant improvement.  In this atmosphere, when the pursuit of profit gets stronger and stronger, managers are forced to seek the easiest ways to make a profit.  Two dangerous things have happened:  some mangers have found they can make more money more easily by trading money rather than goods; others have found that manufacturing where the cost is cheapest gives them the best chance to show profits quickly, even if it means moving production offshore.
"This phenomenon is leading to what I call the hollowing out of American industry.  America's industrial establishment is being reduced to a mere shell, and the same is happening all over Europe.  The world economic situation has slipped out of our control; increasingly, our economies are at the mercy of financial opportunists.  Entire companies have become objects of exchange for the money traders, and great, old businesses are eating up their own assets in pursuit of quick profits.  Some nations are crushed under debt burdens they cannot hope to liquidate.  And as some industrialists invest in the money trading game instead of the future, the ability of some countries to produce their industrial necessities is diminishing rapidly.  None of this activity is helping to create the better, more stable world we say we want."