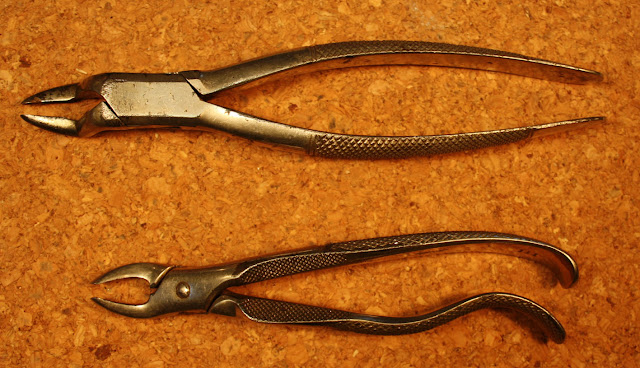 Two dental forceps that came my way at different times.  The top one bears this maker's name:

In the middle of the 19th century, Philadelphia rivaled New York City for its range and variety of surgical instrument makers.  Jacob J. Teufel was one such manufacturer, whose products were displayed at the Centennial International Exhibition of 1876 in that city.  By 1890, he was being listed as "Jacob J. Teufel & Bros." in the city's directory.  "Teufel" can be translated from German to mean "devil", which is perhaps not inappropriate for this kind of tool and its users.

The bottom forceps have this mark:

Claudius Ash & Son was founded in 1905, and became famous as a manufacturer and supplier of dental equipment.   In those halcyon days, good teeth were frequently extracted to make way for better-looking false ones, so good forceps were in high demand.  "Open wide!"