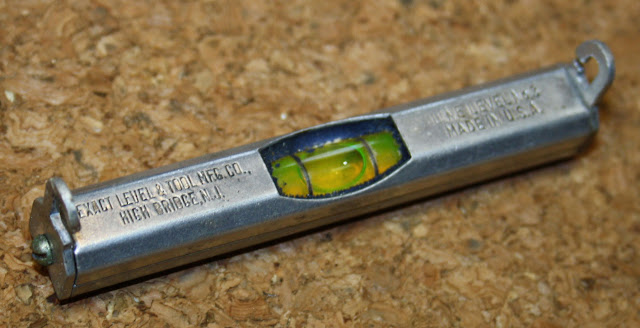 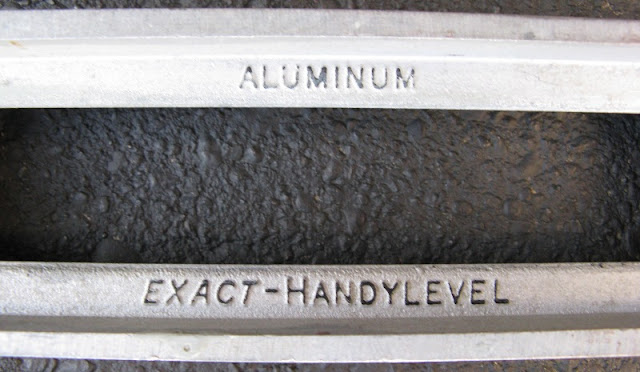 I can't find out much information about this company, although in the photo below it appears to have been a fair size at the time during the Second World War when the U.S. Army presented it with an "E" award.

The company was bought by Hyde Tools of Southbridge, Massachusetts in 1983, but then divested in 1991.  I don't know what happened after that.

High Bridge, New Jersey was the home of the Union Forge Ironworks, one of the first such operations in the U.S.  Founded in 1742, it was the predecessor of Taylor-Wharton, the oldest metal working firm in continuous operation in the States.  The ironworks was shut down in 1972, and the company now specializes in cryogenic storage units, of all things.

I found an old 2-foot level by Exact just a few weeks ago...

Apparently I can't post a photo in this area, but it can be seen at the following URL if you wish to copy & paste:

Thanks for this! I've added your photo. I appreciate any and all efforts to help collect together information about these great old tool making firms!

According to a site redevelopment study:

My grandfather Charles K Deutsch was Vaida's partner in founding Exact Level and Tool. The Deutsch family name was changed to Dodge around 1942-3. The Deutsch and Vaida families had operated a factory in or near Milan, Italy before emigrating to the U.S. Prior to the establishing of Exact Level and Tool, High Bridge was a one-company town, and when I visited I met several of my mother's contemporaries who appreciated having an alternative to working at the foundry. In the image above, the serviceman standing at the lectern might be my uncle Herb; the fifth person standing right of him (as we view) looks like Charles (CK) Deutsch (Dodge).

Found a level made by this company in my grandfather's house after he passed, and took it. My grandmother claims it was used in the building of the Newburgh Beacon bridge, which would put its manufacture some time before 1961-2. The bridge is still standing, so I suppose this company made quality levels!

Forgot to say, it's a four foot level. Absolutely huge!

I spent the summer between my freshman and sophomore year of college working on the assembly line of Exact Level and Tool! It was my job to operate the power screw driver in order to insert the bubbles into the metal frames. The workers were mostly women who were drastically underpaid and had little to no benefits or vacation time. Despite the low wages, they were a remarkably happy and hard-working group! It was one of the jobs I have held that has opened my eyes to the fact that there are extremely intelligent, interesting, and creative persons in all walks of life. It remains one of the experiences for which I am most grateful.

Vaida also had a plant in Manns Choice, PA manufacturing Exact Levels in the 70's~80's.(The building was originally a tannery and burnt down probably 15 years ago) The plant then moved to a nearby facility in Alum Bank, PA during the time when Hyde bought the product line.(Early 80's) The product line and the Alum Bank plant where sold to Starrett.(Early 90's) Starrett manufactured the Exact Level line in Alum Bank until roughly 2005. The plant was then sent down to the Dominican Republic for a couple of years. I believe the equipment was then sent to China. Starrett still holds the rights and partially uses the Exact Level name.

Source: Father worked with them 30 years between Manns Choice and Alum Bank

My father, Robert Trimmer, worked the foundry pouring Magnesium to make the levels. He worked there after World War II until we moved in 1964. His mother, my grandmother, Helen Baldwin Trimmer, worked there too. I believe she got my father his job there. Nanny set the vials in the levels and worked right up to her death in 1967. As a child, a recall visiting them at the factory and even helping Nanny on Saturdays polishing the levels. The Viada family were wonderful people. I have cherished memories of those days growing up in High Bridge.

looking at a machinist level NO. 96-8 excellent shape

I have a wooden level made by the exact level and tool co. Bridge New Jerseyits has number 289 18on it I was wondering if this is any kind of antique

We don't offer valuations on this blog. That said, looking at the pic of the level you're selling, it's just an old wooden level and not in the best of condition. If it were in my neck of the woods, I wouldn't pay more than $5 for it and would probably pass it up even at that price.

I have a 3 bubble aluminum 8 inches in length

I have a "Line Level No.2" with USAF inscribed on the back.

I have an Exact, The Hyde Group, # 24040 level, 48" long magnesium/aluminum casting, apparently made in PLeasantville, PA. Very rugged and accurate...

I wonder if they made tire levelers? I have an old aluminum tire leveler that says "Exact Leveler No. 83 Made in USA". From the age of it, it would make sense.

My dad gave me his 2 foot, 6 glass Exact Level in the '90s. He purchased this in the '50s. I guess some metal, oil and glass will last several lifetimes!!

I found a Line Level No. 3 in my dad's old toolbox recently, decided to look it up and found this site. Nice work remembering these old tools.

Love finding this site- I just picked up my line level that my father had in his tool box for years and somehow made it to my house along with so many tools. Was looking for it because I want to run a line for trimming my hedges

I finally took the time to identify a 48" metal level my father had. It is stamped with "Exact Level & Tool, Mfg. Co. Inc.; High Bridge, NJ. The level is in decent condition but the bubble vials are broken. Still has the original mounting rings, "O: rings. Also have an 18" metal level but it is not stamped with a manufacture name.

My mother was born and raised in High Bridge so when I saw an aluminum
yard stick marked Exact Level and Tool Manufacturing Co. High Bridge
N.J. at an estate sale in Arizona I bought it. It is also marked
part number Y-36 . Based on everything else being sold I'm guessing
it's from the 40s or 50s

I went to auction & In a box lot I found a level in original packaging. Was doing some research. It was #83. Do you know what year that would be?
(If I could figure how to add a picture I would)

I don't know if I can help you with that info but you send a picture to gerald@vanwyngarden.ca and I'll post it.

Please return to tn.gaboy@yahoo.com. I have my father’s Exact 6ft aluminum Level with three glass bubbles I have the center horizontal but need the top and bottom replaced. Does anyone know a source for the vertical bubbles. It will last several generations. 74, trying to get ready for generation 3&4!😊

I can't help you but i hope you find some!

I have a 4' level they made, it was my dad's. Just replaced it last night, the Exact level did a lot of years of duty, but the rubber/plastic holding the bubble levels has disintegrated.

I've lived in High Bridge for 14 years now, a mile away from the Exact Level building. It's been abandoned that whole time, only recently found out who it even was. The roof has caved in & it's up for sale. Someone painted it brown, why I don't know.

Thanks for the update!

I had an 18 inch exact level I used for almost 25 years in industrial construction someone stole it. Best level I ever had in my 32 years of experience. I came across a precision level serial no. 264 I don't know I'm guessing it would be a 15 inch machinist level similar to the starret 98 and 99 level. The level is in a wooden box and has some writing someone name in the box

After I graduated from North Hunterdon Regional High School in 1976 A friend & I got a job @ Exact Level & Tool,I remember working on a saw with water cutting the levels to certain sizes,I only worked there 1-2 yrs but I enjoyed it,my bosses name I believe was Art Hargreaves or Hartgraves,he was a great boss & he would allow my friend to open his trunk to his car & blast his music & I can honestly remember it was Boston`s 1st album.I truly don`t remember much about the sizes or other things about the job except what I said & my boss made sure the work was done and he was a very funny man as we joked alot.Does anybody remember my old boss & I imagine he has passed away by now but hopefully not & what is the building being used for today? Bruce Stadtler

Dude, I just found a 2 ft red oak, box level! Walking thru a residential alley, it was on the side of the road. Stained, damaged, but still kept true. I'm refinishing and polishing the brass. I'll be sending pix as I go along to restore this beauty. You can only imagine as I saw a diamond in the dust.
Mando 3rd generation carpenter out of Long Beach, ca.

Lucky find, and great you didn't just step over it and let it rot. Please do send pictures! You can them to gerald@vanwyngaarden.ca