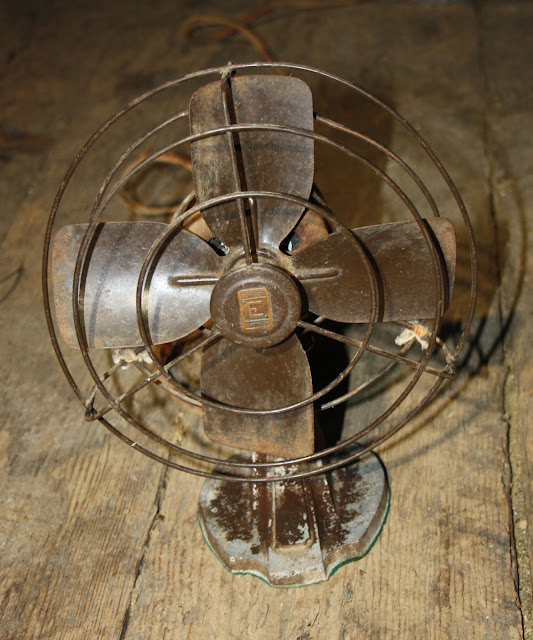 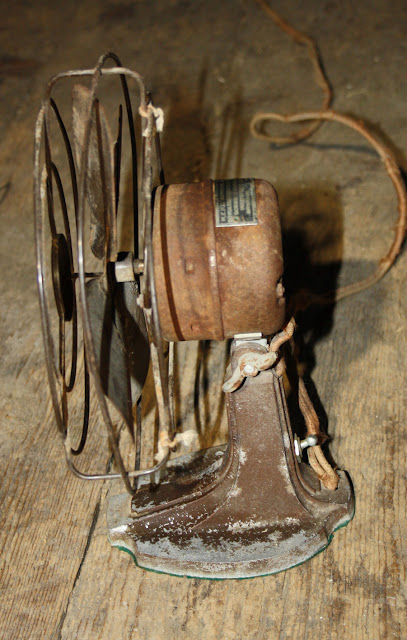 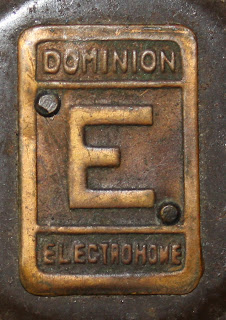 Dominion Electrohome Industries Limited started out in 1909 when Arthur B. Pollock and Alex Welker formed the Pollock Manufacturing Company in Berlin (now Kitchener) Ontario to produce hornless phonographs.  They expanded to making radio cabinets when they acquired a woodworking firm in Elmira, becoming the Phonola Company of Canada.  Then, in 1925, they became the Grimes Radio Corporation.  In 1933, all operations were combined into the newly formed Dominion Electrohome Industries Limited with three divisions:  radio/communications, appliances, and metal products.  Under the "Deilcraft" name (based on the first four letters of the company name) they made furniture in a factory which ultimately (in 1965) became Canada's largest cabinet plant. They made radios for themselves as well as for other companies which retailed their products under various brand names, including "Viking" (Eatons), "Seranader" (Simpsons) and "Dictator" (Hudson Bay Co.). In 1946, they began using the "Electrohome" brand name on their own radios. Electrohome was also Canada's largest producer of fractional horsepower electric motors, churning out more than 10,000 motors per day in 400 different models by the Sixties.  Their small appliance offerings included humidifiers, air conditions, heaters and especially fans, which they produced in greater quantities than any other Canadian manufacturer. When TV technology came along, they produced TV sets, including the only Canadian-engineered colour set. At its height in the 1960's, they employed over 4000 people in 1.6 million square feet of manufacturing space spread through Kitchener, Waterloo and Cambridge.  The company was exporting products to 23 countries worldwide, and by 1968 sales were $44.5 million.  At that point, Electrohome was (behind the Dominion Rubber Company) the second largest employer in the Kitchener-Waterloo area.  The company's fortunes began to decline in the 1970's in the face of competition from foreign imports and difficult economic times.  It discontinued TV production, turning instead to the manufacture of monitors which were supplied to the likes of Atari and Sega.  Consumer products were dropped by the late 1980's, when the company put all of its energy into commercial data and video projection and display systems.  By the turn of the last century, it was all over but for tidying up.  In 2007, Electrohome sold its tradmarks, and the corporation was officially dissolved.

The above information (as well as the ad below) is summarized from Closed Doors:  Electrohome, a project of the University of Waterloo Library. 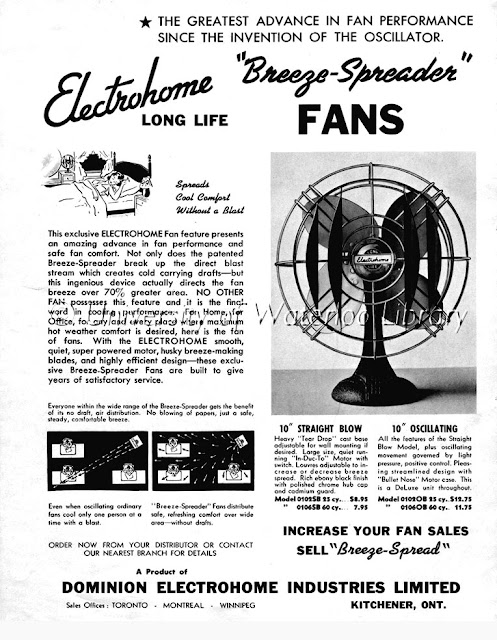 If you like old fans, check out the Antique Fan Collectors Association.
Posted by The Duke at 9:05 AM

its a shame that a company that made world class goods has to give way to cheaper no quality goods ps where did you find that fan?

Where I find almost all of this neat stuff--at a yard sale.

I have mahogany end-tables with leather tops that my parents bought in the 1950's. QUALITY!!

I have a few Electrohome radios and a TV here, including a 1931 Seranader mantel radio, 1933 Dictator BC/SW mantle radio, and a 1971 Apollo turntable.

Looking for accurate information on the age of this Dominion Electrohome Industries fan. I am going to get it into operating condition and want to make it as accurate as possible.