One of my vices is vises: Triumph 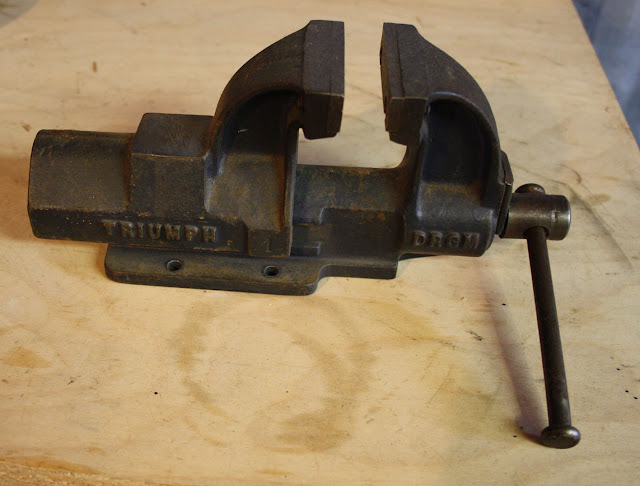 This little vise was made in Germany and marketed under the "Triumph" name.  (Although I'm sure there's no connection, don't forget that the Triumph motorcycle company of Coventry, England was also founded by a German--Siegfried Bettmann out of Nuremburg!)

The acronym D.R.G.M. with or without the periods stands for 'Deutsches Reichsgebrauchsmuster,' which protected a tool from being copied in terms of its use or design for a period of 3 years.  Introduced in 1891, it was basically a cheap way for manufacturers to fend off copiers. That's because patent costs on Germany at the turn of the 19th century were 2-1/2 times those in England, and 36 times the U.S. fees.  As such, the DRGM didn't actually protect any intellectual patent on the device.  Consequently, it was often referred to as the "kleines Reichspatent," colloquially the "poor man's patent." It continued to be available until the end of Allied occupation of Germany in 1949, with the final 3 years of protection extending to 1952.  After that date, it was replaced with  'Deutsches Bundesgebrauchsmuster' (D.B.G.M.).
Posted by The Duke at 9:16 AM

i have one aswell. I am planninh to restore it and use it. Looks pretty good. I have pictures if you want.