Every now and then I manage to turn up one of those neat screwdrivers which have a simple spring mechanism for holding the fastener on the end of the screwdriver to aid in starting it in some awkward location.  A clever idea. There are various imitations, but the best ones are marked "Upson Bros., Inc."

Below, a sample of their flat-head offerings: 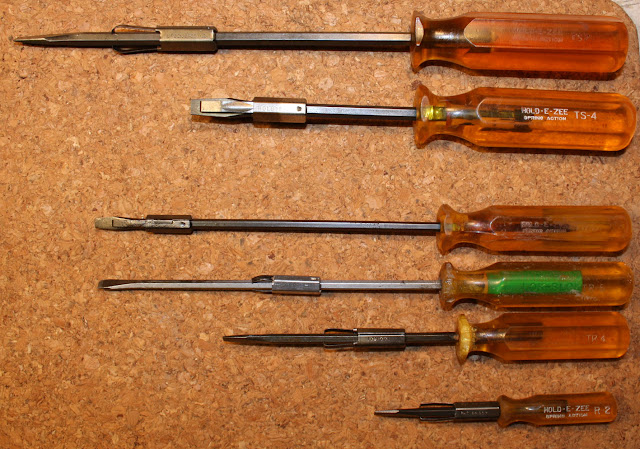 And, not to be forgotten, Phillips: 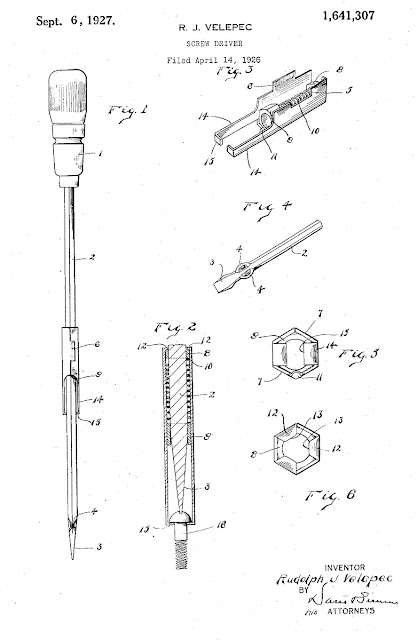 Mr. Velepec assigned his patent to the Haines Manufacturing Corporation of Rochester which had been incorporated in 1920 "to manufacture, buy and deal in automobile accessories, etc."  The directors included Millard C. Upson and Merrell A. Upson.  At some point in the next decade, they must have gone off on their own and formed Upson Brothers, Incorporated with headquarters on Exchange Street in Rochester.  Over the following years they were assigned patents for such things as an "anti-rattling device" for sliding car windows (Patent 2047047 in 1936) and a "tire valve manipulating instrument" (Des. 126,572 granted in 1941).  Of importance to the present story, Mr. Velepec patented improvements to his screw driver in 1931, and assigned the patent to the Upson Brothers Inc.  Although the idea had first received a patent in 1927, the product itself does not appear to have entered the wider consumer market until 1948 when an ad appeared in Popular Science: 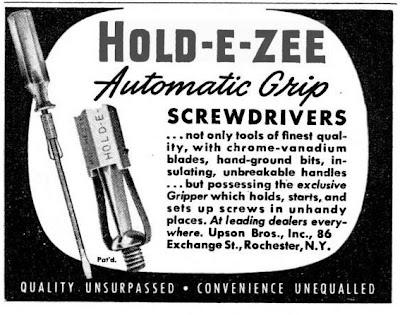 Although they were already using the name, the following year, Upson Bros. filed for the "Hold-E-Zee" trademark (which was granted in 1950).

Also, in 1949, they added screwdrivers for "recessed head screws" (by which they meant both Phillips and Reed and Prince) to their product line:

Mr. Velepec continued to improve his idea and to assign his patents to Upson Bros. (I have found a reference to an R.J. Velepec Company, Inc. of Rochester, so it seems that he wasn't an employee of the Upson concern.)   In 1952 he applied for a patent (2,840,382) for a new handle design which was subsequently trademarked as "Lok-Blok" in 1955 by the Upson Bros. company.

The Hold-E-Zee screwdriver seems to have been the cash cow for the company and perhaps their sole product.  They continued to advertise their screw drivers in Popular Science and Popular Mechanics up until 1968. 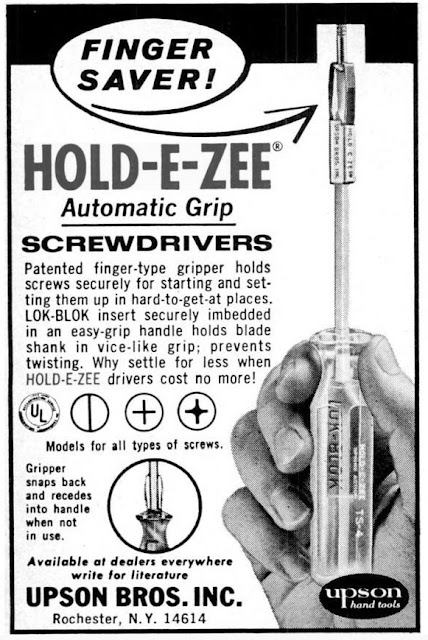 In that year, in a strange reversal of fortunes, an apparently new company out of Meadesville, Pennsylvania, Hold-E-Zee Ltd., filed to trademark "Upson."  (Hold-E-Zee is still listed as a manufacturer of hand and edge tools and, as late as 1997, a design patent for a hand-held nut driver was being assigned to them.)  Putting the pieces together, it seems likely that Hold-E-Zee was always, or is now, owned by Channellock (also out of Meadville) since until around 2004 the Channelock catalogue offered screwdrivers under the Hold-E-Zee name.  (As an aside, the Channellock website has an interesting video on how their pliers are manufactured.)

Stanley also used to offer screwdrivers with locking tips but seems to have discontinued this product line.  Since US patent protection expires after 20 years, perhaps they simply appropriated Velepec's design.

Found a Hold-E-Zee TR-2 screwdriver in a thrift store for $.50 and really appreciated this fine article on the history of Upson Bros.
Bob M.

I found an Upson UB-7 (7" hex shank, 1/4" slotted, no screw holder device) screwdriver on the berm of the road while bicycling in Ohio yesterday. It was in great condition and has a red color LOK BLOK insert in an amber color handle. I am 64 years old and had never heard of Upson tools and had to Google some information about the company. Thanks for the detailed history!

What's the worth of the Tr2

Used? a few bucks? Much less than you hope, unfortunately,

I appreciate the history info also! Thank you! I'm here at this site doing research on an Upson UB 2 with a 6 sided insert called "LOK-DUO. It looks & sounds, to me, like the insert is removable & with the straight blade extending 1 3/4" & a slot across the insert at the body, it is removable & could, quite possibly, have a Phillips tip up inside. The insert, itself, extends 1/16" to 3/32" past the top end of the main body. It, also, looks as if the ole boy, who was the previous owner had utilized a pair of Vise Grips, on the indent of the body, a couple times! LOL. The straight blade (common end) has a small chip in the center but I believe that the steel used to make it is MUCH better than the steel used today! I lightly tried to tap on the Red insert extending from the body but didn't want to hurt this cool piece of history! I don't see the "Bros" stamp after "Upson", so it may have been made by an imitator, but, I think it is a cool piece! Any info on this UB 2 LOK-DUO?? Thanks again Mister G!

I worked for the R.J. Velepec Company from 1979 to 1990. I still have many of the tools the company manufactured. One of the people who owned the company back then is still alive and living in Fairport, NY.

If I remember correctly, Channellock bought the R.J. Velepec Co. in 1987 or 1988 and moved all operations from Rochester (Greece), NY to Meadville, PA in 1990.

Thank you for the first hand information, it can be so hard to find anything on the later years/demise of a company.