"Battle of Britain" The Making of a Film

The following photos and movie stills are contained in Leonard Mosley's book, "Battle of Britain"  The Making of a Film.  (Ballantine, 1969).  Mosley, a well-established British journalist and war historian, was given the job of writing the "official book of the film."  The idea for the film came from S. Benjamin Fisz, who flew Hurricanes with the Polish Air Force in WWII.  He had previously produced the film The Heroes of Telemark in 1965, a story of the Norwegian resistance.  For the "Battle of Britain", he was able to get  Harry Saltzman to produce it.  The Rank Organization initially came on board to provide funding, but this fell through, as did a deal with Paramount Studios.  In the end, United Artists financed the film. 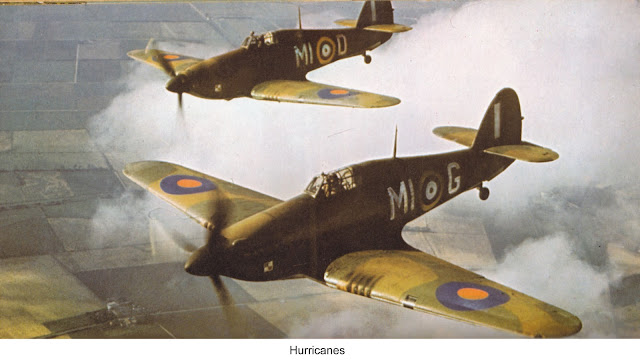 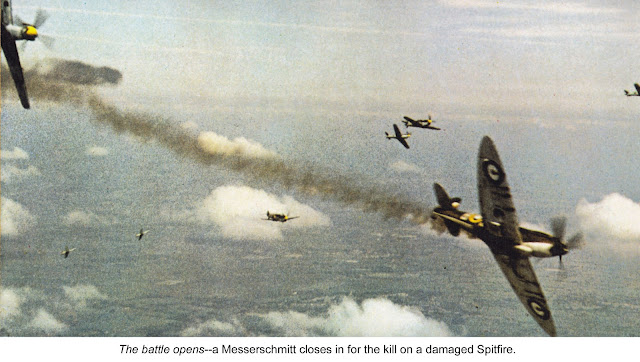 The world was scoured in 1966 looking for airworthy examples of fighters and bombers.  While they initially believed only 6 flying Spitfires existed, they discovered that there actually 109!  The film used 27, 12 of which were airworthy.  Hurricanes were another story--only 6 were still flying in the world, and the film company managed to acquire three of them. 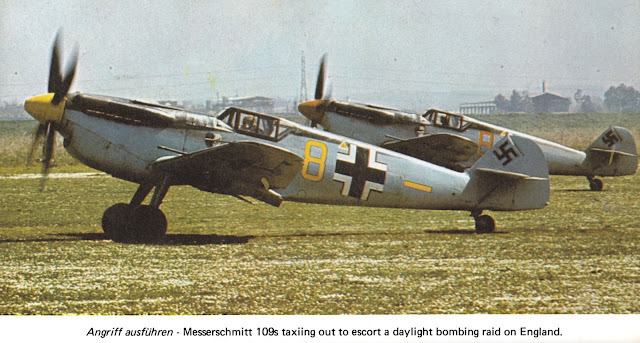 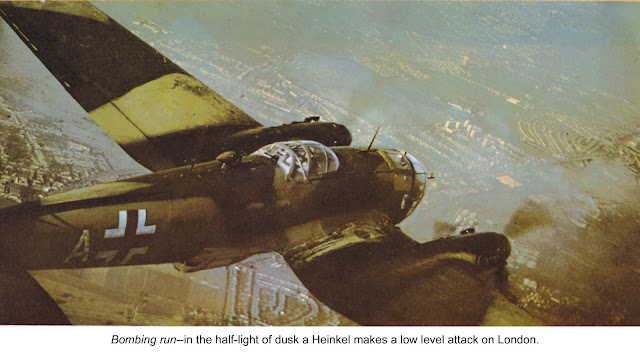 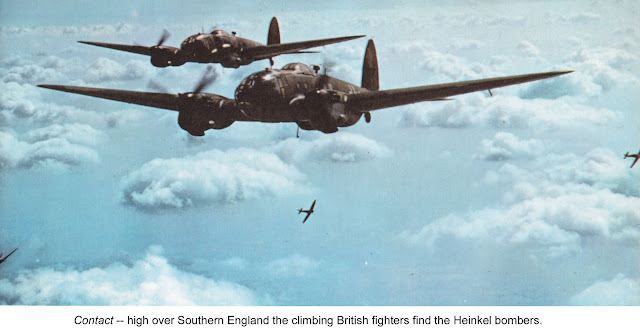 Finding Messerschmitts and Heinkel bombers was solved when General Adolf Galland was brought in as the German consultant.  He was able to point the production company to Spain, where the air force included a number of Messerschmitts which were going to be put up for sale, along with Heinkel He111 bombers that were continuing in service with the Spanish Air Force.  Both types of German aircraft had been made in Spain and equipped from new with Rolls-Royce Merlin engines.  In 1966, the individual asking price for one of these Me-109's with less than 200 hours on the engine was just $6300, less than the propeller alone had cost originally.  The film company bought all of the planes and parts, enough to make 28 aircraft, for an undisclosed amount.


As for the Heinkels, the film company approached the Spanish Air Ministry for permission to film the bombers in the air over their Spanish airdrome, in scenes with the British and German fighters.  They offered to pay all expenses for the use of the planes, fuel, and wages of the pilots, crew and ground staff.  The Spanish government generously waived the cost, asking only that the company consider making a cash donation to the orphan school run by the Spanish Air Force.  The film company later estimated that this gesture had saved them $420,000.  Their donation to the school?  $1400.  Shameful. 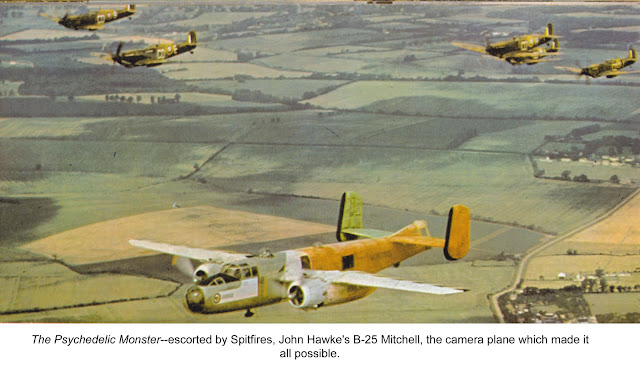 All aerial filming was done from a specially modified B-25 Mitchell christened "The Psychedelic Monster" because of its outrageous paint scheme (this was the Sixties, remember).  Apparently, it was flown back to the U.S. where it changed hands several times and was eventually renamed "Lucky Lady."  It now sits effectively derelict outside of an airport at Franklin, Virginia, grounded as much due to legal as mechanical problems.

Although imdb claims the film lost $10 million worldwide, I think it's a great flick.  It certainly couldn't be made today.  The book is also well worth the time to read it. 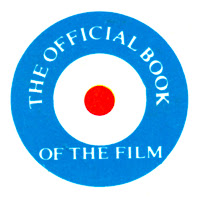 I saw this movie as a 10yo at the movies when it was first released. Somewhere in my fathers house, is the original posters for the movie, hopefully wrapped up, still laid flat as they were when he first got them in 1969. I hope to get them from him one day.

Hamish Mahaddie was a former British bomber pilot who worked for the movie industry and his job was to find all kinds of aircraft. It was he who found out that the Spanish airforce still had several Spanish versions of the ME 109 ( official name Buchons HA-1109) and Heinkel 111 (Spanish version CASA 2111). Only 8 Buchons were still flyable but of the dismanteld airframes 20 could be made flying. These were flown by Spanish pilots.
The CASA 2111 were still used. The company had to paint and repaint these at their own costs.From America (Texas) came a spitfire and 4 bouchons these were owned by the Confederate Air Force (CAF). These were flown by CAF pilots.
The B25 mitchell nicknamed "The Psychedelic Monster" was painted for a reason in outrageous colours. The dog fighting had to be done in certain angles near to this aircraft. The pilots in the other aircraft could see by the different coulors if they were in the right position of this aircraft.