This is a very clever Japanese-made adjustable wrench.  The jaws are controlled by the knob on the side, which you can slide back and forth to open or close them.  Basically, it operates on worm and bevel gears.  The only weakness is that it tends to jam if the knob is moved all the way to the right, which puts the jaws fully open.

Kenneth F. Halls of Broomfield, Colorado originally patented an adjustable wrench which relied on a perforated drive belt (U.S. Patent No. 3,368,432) in 1968 but in 1971 he received a patent for this improved design: 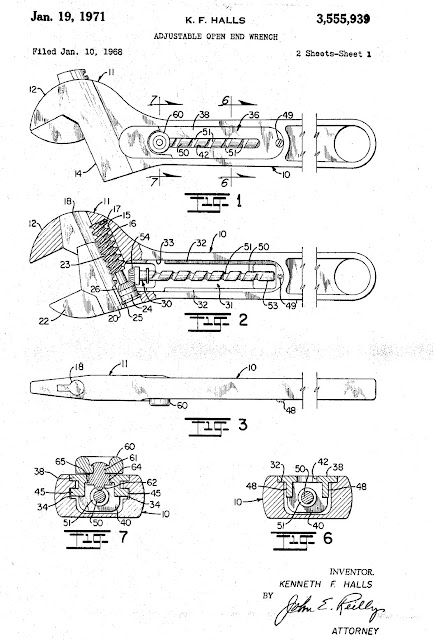 These wrenches seem to have been something of a gimmick in the 70's. According to Datamp, they were intially made in Eldorado, Kansas by the Petersen Tool Company (apparently no relationship with the DeWitt, Nebraska-based company of the same name that originally made Vice-Grip pliers) and marketed as the "Helix" wrench:

Apparently, the Petersen firm had gold-plated versions made up to present to employees.  Below, from ebay:

Unfortunately, the Petersen Company failed, maybe because it gave away too many of the gold-plated wrenches.  Anyway, production then moved to Japan.  Popular Mechanics (December 1976) liked the Japanese "Slide-a-Wrench" version (also note the $2 price drop from the previous 1972 American ad): 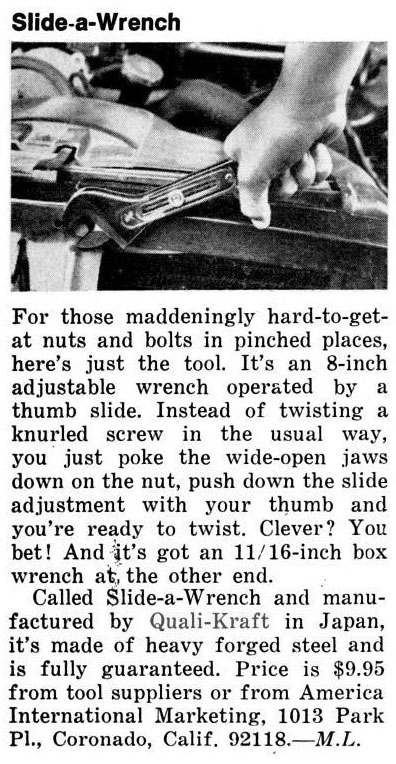 Great info i have one for sale on ebay !!!