Joseph-Armand Bombardier and the Ski-Doo 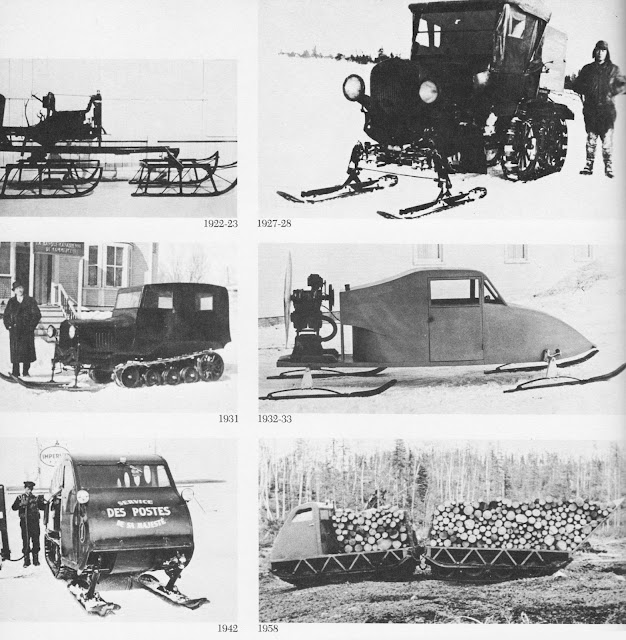 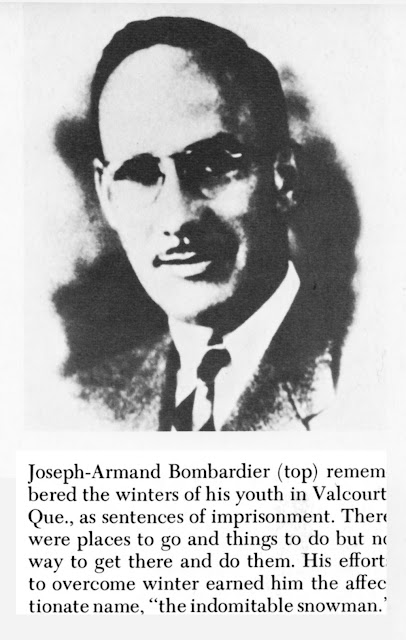 Bombardier (correctly pronounced "bom-bar-dee-ay", not "bom-ba-deer") grew up in the village of Valcourt, in the Eastern Townships of Quebec, where winter reigned for 6 months of the year.  He designed his first snow machine when he was only 16 years old, using a Ford Model T engine and a homemade airplane propeller.  It was an unmitigated disaster.  His father sent him off to a Montreal garage to apply his talents there.  In the winter of 1934, his infant son suffered an attack of appendicitis.  Bombardier put him in the horse-drawn sleigh to try to make the 15 mile trip to the local hospital through six-foot snowdrifts.  The child died on the way.  This tragedy prompted him to greater efforts to produce a better vehicle for winter travel, and in 1936 he came up with the first functional example, a seven-passenger, enclosed cabin on half-tracks and skis which he called the "Bombardier Snowmobile."  It sold for $7500.  Another great breakthrough came during a 1958 trip to Austria, where he discovered a two-stroke, single-cylinder engine weighing less than 30 pounds.  He used this to power a new generation of smaller vehicles which he called Ski-Dogs, as he imagined the vehicle replacing dog teams.  Somehow the name got corrupted to "Ski-Doo" and this name stuck.  In 1964 (when Bombardier passed away) his company had sold 7,000 Ski-Doos; by 1970, it was producing over 200,000.  In 1971, the company purchased Industries Bouchard, Inc. of La  Pocatière, Quebec, which made Moto-Skis.  This acquisition gave the Bombardier firm control of 50 percent of the snowmobile market.  That still left about 70 other manufacturers of these machines in the early Seventies, and I'm sure that there are far fewer today.

In 1968, Minneapolis-based insurance salesman Ralph Plaisted set off for the North Pole with a party that included Jean-Luc Bombardier, Armand's nephew.  They traveled in 60-degree below temperatures, sometimes gunning their machines from one ice flow to the next, and trapped by a blizzard that raged for six days.  The last 50 miles were traveled at high speed over thin ice, as slowing down would have meant breaking through.  At the conclusion, a ski-plane picked them  up, but only had room for three of their four machines.  So, one yellow and black Ski-Doo is still out there, somewhere in the Canadian Arctic, free for the taking. 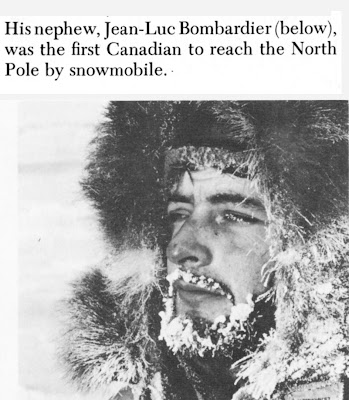