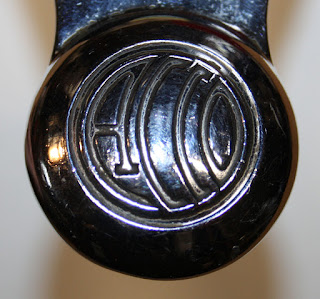 I found this two-hole punch at a thrift store.  I already have a two-hole punch (actually, I have several) but for $2 I couldn't resist the art deco logo.  (I supposed if you used it all day long, it would leave a mirror-reversed impression on your palm, good for additional advertising when giving the high-five!) 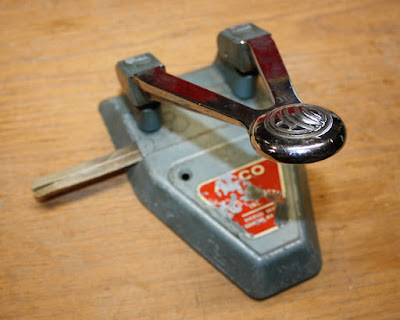 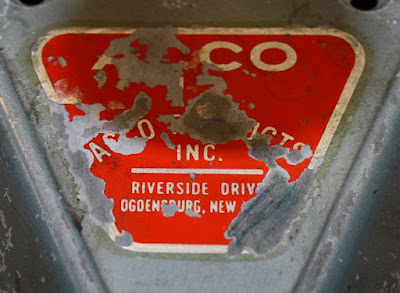 ACCO was founded in 1903 in Long Island, New York by Fred J. Kline as the American Clip Company. ACCO became the official company name in 1922.   It created a presence in Canada and Great Britain in the mid-1920's, and eventually acquired Rexel.  In 1987 it was bought by American Brands before being spun off as  ACCO Brands in 2005. In 2017, it acquired Esselte, which itself had absorbed Leitz, Germany's largest office supplier (Louis Leitz invented the lever arch file in 1896) and the Rapid stapler company. ACCO Brands now offers products in more than 100 countries, and more than 20 top brands, including Swingline and Wilson Jones.  It's headquartered in Lake Zurich, Illinois and had 2016 sales of $1.56 billion, making it the world's largest supplier of branded office products. 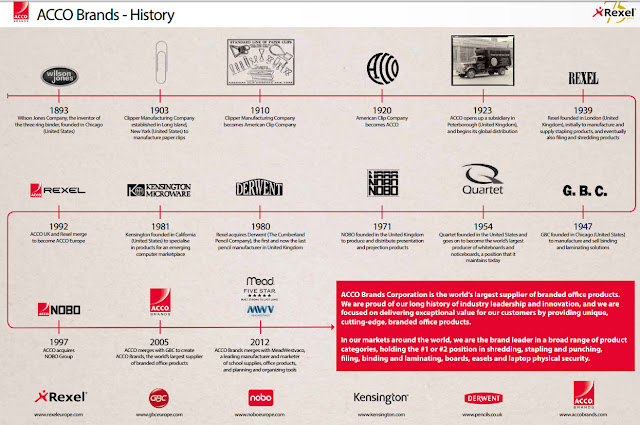 ACCO's presence in Ogdensburg, New York began in 1946.  In 2010, the company announced that it had extended its lease until 2020 on the Canadian Brampton plant, where it manufactured and distributed products in Canada, employing 285 people. The Canadian VP and General Manager said, "Our lease extension signals our continued commitment to the Canadian office products market, as both a manufacturer and a supplier."  However,  in 2013, the plant in Brampton, Ontario was closed, eliminating 95 hourly and 30 salaried jobs.  Those jobs went to Ogdensburg, which became the distribution center for the northeastern U.S. and all of Canada..  Good news for New York, not so much for Ontario.  The same year, the company was given the Made in USA Foundation Hall of Fame Award for more than one hundred years of paper clip manufacture.  At that time, ACCO Brands was making more than five billion paper clips per year at its Pleasant Prairie, Wisconsin plant.  Perhaps they could spare one of those paper clips to add a note that they're not likely to win a Made in Canada award.
Posted by The Duke at 9:33 AM