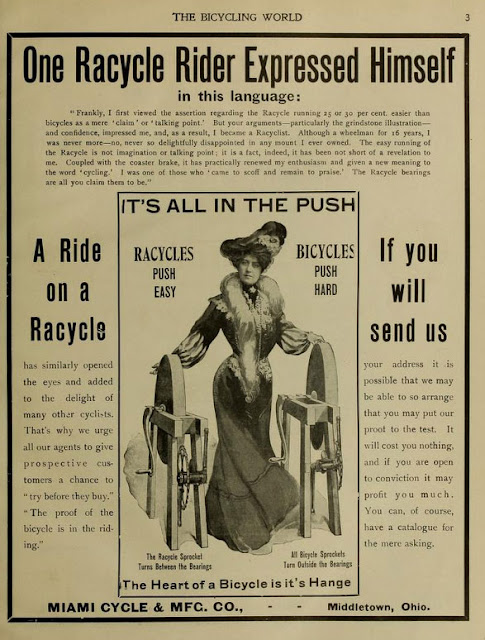 "The Heart of a Bicycle is it's Hange"?  Both grammatically incorrect and nonsensical.  In other words, good copy!

As for the Racycle, it took its name from Colonel Frank H. Ray, former president of the company.  According to the Los Angeles Herald of May 6, 1900:

The easy running of the Racycle is caused by placing the ball bearings in the hubs of the cranks outside the sprocket and nearer the center of the pedals, where the power is applied. This reduces the leverage and makes 27 per cent less pressure on the bearings than on all other bicycles. Practical demonstrations of this can be seen at the above agency. The Racycle hanger has a self-oiling magazine, which lubricates the bearings for one year, and is absolutely water and dust-proof.

(Naming its products was not the company's forte:  they had tried to develop a steam-powered automobile to be called the "Ramapaugh" after an Indian tribe.  The whole issue of cultural misappropriation aside, it's a terrible name for a car.  Perhaps fortunately for history, the car never saw production.)

For a more thorough history of the company, go to Vintage Motorbikes and Bikes.
Posted by The Duke at 9:10 AM