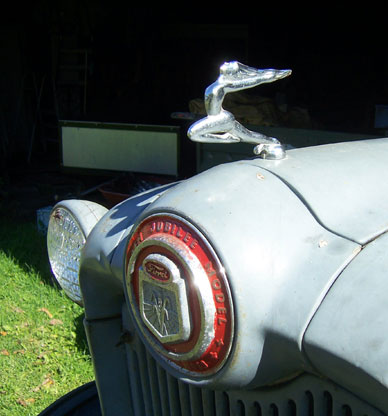 I used to own a 1953 Ford Golden Jubilee tractor.  At some point, I found a hood ornament at a yard sale for a buck or two.  Out of whimsy, I decided to mount it on the tractor.  Whenever I was asked about it, I made up a story. I would explain that old Mr. Henry Ford actually came and sat on some of the tractors in the factory, and those tractors were given this hood ornament as a tribute.  (Henry Ford died in 1947, so they would have had to bring him back from the dead to do this.)   At one point, I needed the help of a local tractor mechanic, who took the tractor over to his place. Another customer asked about the hood ornament and, straight-faced, he passed on my story. So, it spreads...  He he he!

Anyway, I've never been able to find out what car the hood ornament originally decorated.  Turns out this motif was pretty common, but none of the images I've looked at on google are identical to mine.

I finally sold the tractor.  The steering box packed it in after 62 years.  It's a recirculating ball system with a bad design for the top bearing, which gets starved for lubrication.  The steering gearbox developed a leak, I didn't keep filling it up (a very awkward and time-consuming operation), and she seized up.  The manual proclaimed the "ballnut" was un-rebuildable, but new American-made ones were non-existent.  I ended up buying a new Chinese-made replacement, which failed several months later.  It was terrible quality, and didn't match the specs of the original.  (A real pain, since you have to remove all of the sheet metal and then the entire steering gearbox to get at this part.) I was finally able to find a youtube video showing me how to rebuild the original, so I was able to get it back running (and steering) again.  Still, since the tractor was proving unreliable, it had to go.  The guy who bought it seemed enthusiastic, so I can only hope it went to a good home.

I kept the hood ornament, though.
Posted by The Duke at 10:43 AM

Pontiac did several similar ornaments in the mid-30s.

And so did Buick.