Above, a hacksaw frame with this brand, and below an SAE wrench.  The quality of the wrench is quite impressive, including the plating, which is perfect.

The only marking on the wrench which may give a clue to the manufacturer is show below.  Other than it's made up of two letters joined with a hyphen, the stamping is not distinct enough to make it out. 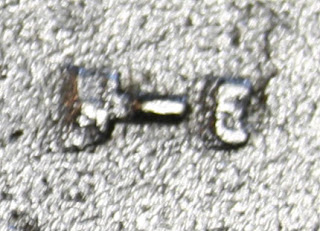 From what I can find on the web, "Powermaster" was a brand of Oxwall Tools.  Given my own experience with this generally cheap tool line, perhaps Powermaster was their premium brand.  I discovered that someone online is offering a complete boxed Powermaster socket set with the following label:

The Consolidated Foods Corporation originated as the D.C. Kenny Company, a wholesaler of coffee, tea and sugar out of Baltimore. New Brunswick, Canada-born Nathan Cumming bought the firm in 1939, then added other companies and eventually renamed it CFC in 1954.  In 1956, they bought Sara Lee, adopting this as the company name in 1985.  In the 1960's they went on a buying spree, picking up company after company, eventually adding 90 to the empire.  According to the Chicago Tribune (July 11, 1978), Consolidated Foods sold six small hardware and houseware companies, including Oxwall Tools ("an importer of hand tools"). The article doesn't say to whom the company was sold. Interestingly, however, there are references as late as 1999 that the Sara Lee Corporation still listed Oxwall Tools B.V. as a Netherlands subsidiary. ("B.V." is the Dutch abbreviation for "Besloten Vennootschap" or "Limited Company.")
Posted by The Duke at 8:28 AM

Thanks for the note. If you could send me a couple of pictures f the process I'll add it to the post. gerald@vanwyngaarden.ca

I have a powermaster saw like the one in your picture as well. Powermaster #3578 Japan. Thanks for your blog! I'll send a picture.