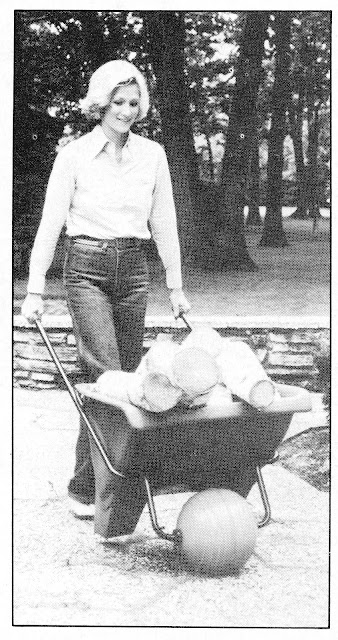 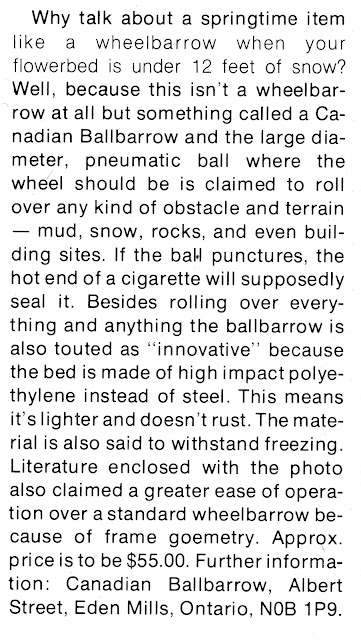 Above, from Canadian Workshop, March 1979

Below, from John Seabrook  "James Dyson built a better vacuum. Can he pull off a second industrial revolution?"  (New Yorker, September 20, 2010)

In 1971, Dyson and his wife bought a three-hundred-year-old farmhouse in the Cotswolds, and in the course of doing repairs he found himself spending a lot of time with a wheelbarrow. “I discovered what a crummy piece of equipment it really was,” he writes. It was unstable, and the rubber wheel sank into wet earth and left ruts on the lawn. The wide shallow metal trough slopped its contents and smashed into doorframes, and cement stuck to its sides. Dyson’s solution was to design a deep molded-plastic trough and to replace the wheel with a plastic sphere. The Ballbarrow, as he called it, was a hit in Britain. Dyson writes that within a year he had a fifty-per-cent share of the wheelbarrow market and was selling about forty-five thousand Ballbarrows a year. But, according to his memoir, before he could enter the much larger U.S. market, his idea was stolen by an employee and taken to a Chicago-based plastics manufacturer, which rushed a knockoff Ballbarrow onto the market. It was briefly available at Sears, but was soon discontinued.

Where did all of these things go?  You can't find them for sale anywhere.
Posted by The Duke at 8:04 AM