I stopped at a ReStore recently and bought this old wood chisel for $1.  It was dirty and rusty and all I could make out was "Germany.." Not "West Germany," so presumably pre-war.  Worth putting some effort into it. 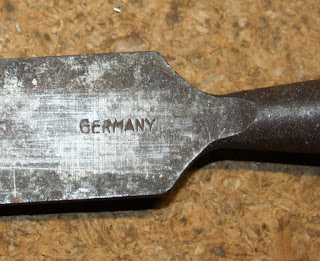 I cleaned it up (the best tool I've found for this job is a 3M Scotch-Brite deburring wheel--it strips off grime and rust like there's no tomorrow, and leaves a bright surface), followed by a light buffing with red rouge on a cloth wheel).  A previous owner had put a bevel on the flat side of the chisel, something you should never do,  So, I had to carefully grind the end of the chisel, dipping frequently in water to avoid drawing the temper, then re-grinding the bevel (again, frequent wetting) to leave about a 1/16" thick edge, then carefully grinding down to a sharper edge on a stationary belt sander (frequent dousing!), then final grinding on a wet wheel to further sharpen the edge, and then work on a whet stone to bring it to its final degree of sharpness, removing the feather edge.  Then a few passes on a leather strop and it's ready to be put back to work.

Oh, and cleaning revealed it to be a Hoppe tool.  Bonus!