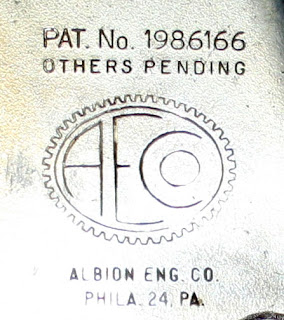 Everyone is familiar with using smooth rod drive caulking guns.  I picked up the one above because it was so retro.  Turns out, it's design was the first of the kind.

F. Karl Schneider purchased Albion Engineering Company in Philadelphia in 1929. At the time, the company consisted of a machine shop that built keg washers for Schmidt's Brewery and elliptical gears for the local knitting mills. The machine shop was on the second floor of a wagon wheel garage, powered by overhead drive shafts.

In the early 1930s, F. Karl Schneider designed a caulk dispensing gun for Calbar Paint & Varnish Company who manufactured paint and putty in the first floor garage Albion owned. In 1936, F. Karl Schneider was awarded the patent for the smooth rod drive caulking gun. The development of the first smooth rod drive caulking gun launched Albion into the dispensing tool market. In 1937, Albion patented a trigger-actuated grease dispensing gun, with design features still in use today. 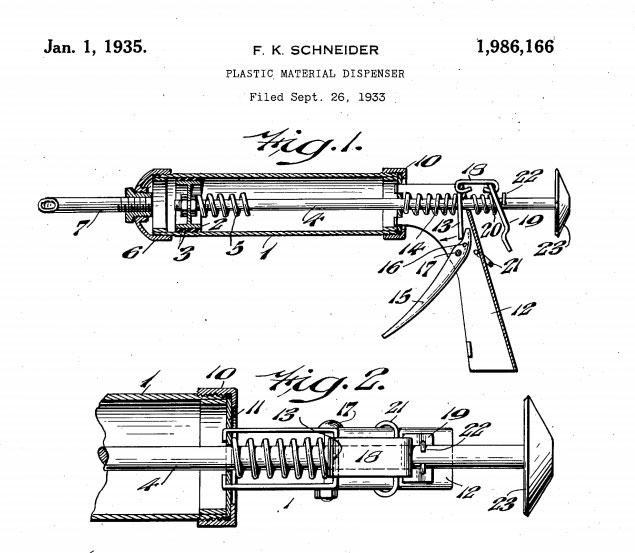 In 2005, the company moved out of Philadelphia and into new premises in Moorestown, New Jersey, a half hour east across the Delaware River.  In 2012, Newborn Brothers of Virginia filed a lawsuit, alleging that Albion has misled customers by claiming their products are made in the U.S. when they're actually made in Taiwan.  Newborn also alleges that Albion’s owner’s guide has the phrase, “All Albion products are made in America,” on the cover. In addition, Newborn claims that certain Albion products are stamped with the abbreviation, “Phila., PA. USA.,” when a news release from the company claims that the Philadelphia location closed in 2005. Other products allegedly have a “Made in Taiwan” geographic origin mark hang tag on the handle. Although I assume the case has yet to be settled, the allegation is sad.