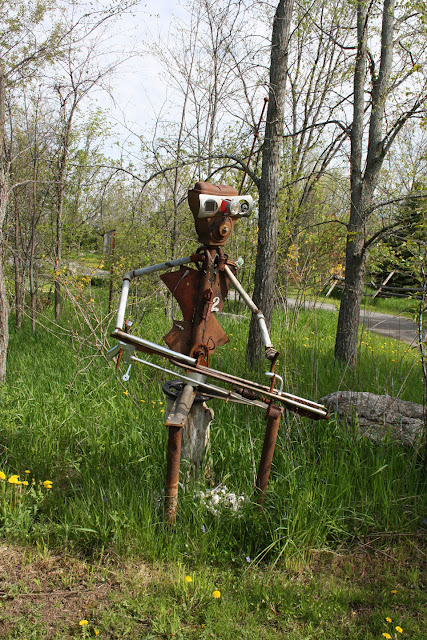 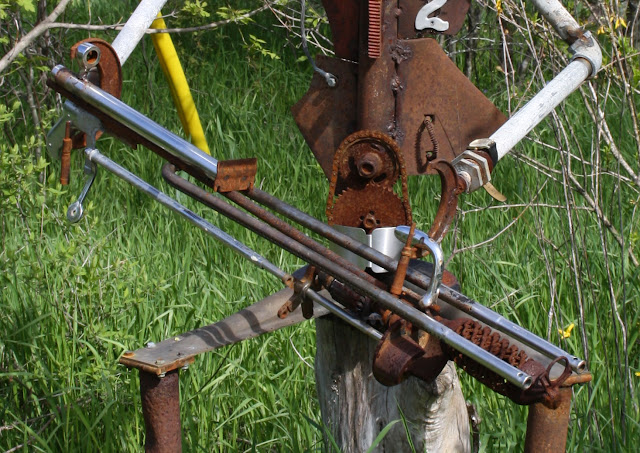 A while ago, I mentioned that I like to weld sculptures out of scrap metal for my wife's gardens. Above, the full-size one I call TwoUnit.  (I tell visitors who ask about it, "They only hunt in pairs.  I don't know were OneUnit is!") It's made out of a parking meter I found in a neighbour's brush pile, likely uprooted decades ago by teenagers and brought out here and broken open for the coins it contained.  My neighbour didn't even know it was there--I just happened to discover it while collecting litter one spring morning. The main part of its gun is an old steel boiler brush left behind in my late parents' home. The hands are old micrometers.  I know, I know--sacrilege!  But they were found in a neighbour's shed, where they had been lying in wet mud for years and years.  Totally knackered with no way to bring them back. Its feet are old, heavily worn ax heads, beyond reuse. Everything else is also found metal. I didn't paint it because I wanted it to look like it had been frozen there for centuries. It was my inspiration when I was combating my first bout of cancer. Afterwards I found a discarded aluminum number along the roadside, from which it took its final name.
Posted by The Duke at 8:55 AM