American Tools Proudly Made in China

I recently bought some Husky sockets.  I always thought they were a good name.  Below is the label: 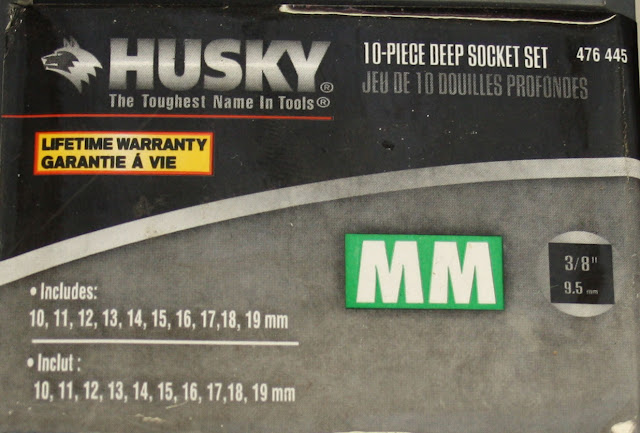 But, on the back of the package:

Just this week I picked up a "Milwaukee"  paint scraper:

And again, on the back:

Last year I read  Built from Scratch ("How a Couple of Regular Guys Grew The Home Depot from Nothing to $30 Billion") by  Bernie Marcus & Arthur Blank with Bob Andelman (Times Business/Random House, 1999.)  In one chapter, they explained how Sears Craftsman power tools had been made for 40 years by Emerson Tools out of Tennessee, until Sears dumped them abruptly in 1997 when Sears turned to China to manufacture its power tools.   Wikipedia reports that, "Craftsman tools came under fire in 2004 in a lawsuit accusing Sears of false advertising and consumer fraud for questionable use of the "Made in USA" slogan." (This weekend, I walked around the local Sears store.  Every single Craftsman hand and power tool I looked at, as well as a Rockwell power tool, were marked either "Made in China" or "Imported by Sears Canada.") Anyway, Home Depot happily agreed to have Emerson start making power tools for them, and in return were given the rights to use the "Ridgid" name by Emerson.  Last year, I thought I'd have a look at a new Ridgid tablesaw at Home Depot.  The box was stamped, "Made in China."  The store clerk told me Emerson only makes vacuum cleaners for them now.  So much for patriotism.


This is one reason that we feature, remember and celebrate Canadian- and US-made tools on this blog, 'cause most of the once-famous domestic names are either gone, or are just badges for foreign-made junk.

Well the high rollers pretty much killed of manufacturing here. Even before the rise of China as a source of cheap manufacturing we saw the migration of plant and equipment down Mexico way soon after signing NAFTA. All these trade agreements have a hidden agenda either based on money or power. The TPP is a power play which will do nothing for American workers