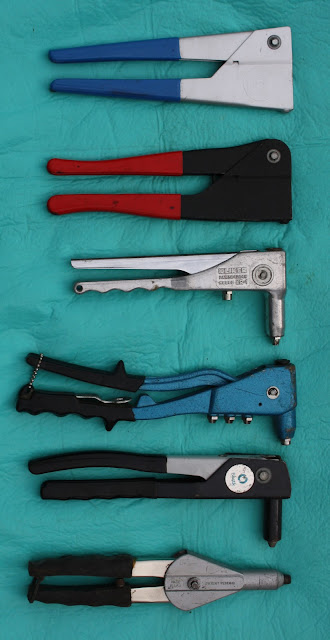 My modest collection of blind rivet guns.  From top to bottom:
The first company to commercially offer blind rivets was the United Shoe Machinery Company, a U.S. company (although the box below is from their Canadian subsidiary): 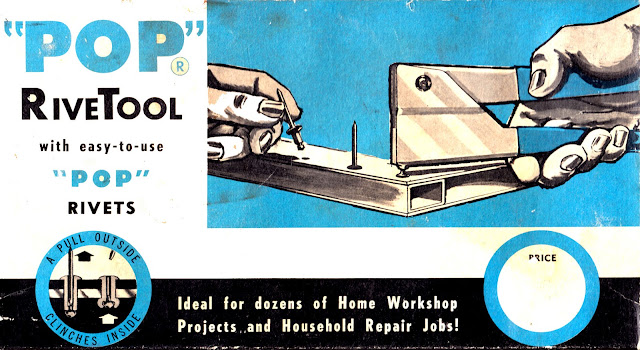 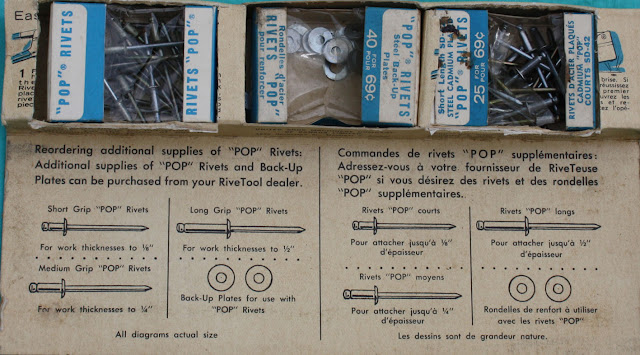 The history of the blind rivet takes us back to the early decades of the last century.  Solid rivets had long been used, but generally required access to both sides of the assembly to be installed, using a rivet hammer on one side and a bucking bar on the other.  In 1917, Hamilton Neil Wylie, an engineer and Royal Navy reservist, was granted a British patent for "an improved means of closing tubular rivets."  He joined the British aircraft company Armstrong-Whitworth in 1922 and continued to develop his rivet design further.  In 1927, his patent application incorporated a pull-through mandrel so that the rivet could be used "blind."  In the meantime, another British firm, the George Tucker Eyelet Company, was also in the game.  This firm was founded in 1888 for the purpose of making eyelets for leather boots and was purchased by the United Shoe Manufacturing Company in 1903.  By 1914 it had become the UK market leader in this field.  By 1928, they were producing a "cup" rivet based on a design which required a separate mandrel, and the rivet body to be hand assembled prior to use for the building of the Siskin III biplane produced by Armstrong-Whitworth.  Working together, the two companies produced the one-piece rivet incorporating both the mandrel and the rivet. Thus was born the "pop rivet" whose production skyrocketed during World War II.  After the war, new markets were exploited in the automotive, domestic appliance and metal furniture applications.
Posted by The Duke at 5:39 PM