Whistle while you work

My small collection of whistles: 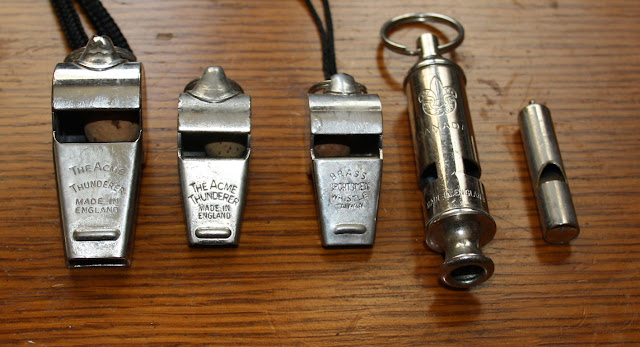 According to the Acme Whistle site, Joseph Hudson was a Birmingham-trained toolmaker who made and fixed a variety of things to make ends meet. He also had a passion for whistles.  His first success was a bosun pipe which he designed in 1870.  Its high-pitched notes would pierce the worst gales.  In 1883, the London police were looking for something to replace the hand rattle that they used as an alarm.  Hudson was supposedly inspired by his violin to produce the unique sound for this whistle.  When tested, it could be heard a mile away, and so it was accepted by the police force.  In 1884, the Acme Thunderer was launched, and remains today the world's leading pea whistle. The "Thunderer" was originally made by Alfred Edward de Courcy of Birmingham, the only company other than Hudson to survive into the post-World War I world.  De Courcy's company was bought by Hudson in 1927.


Acme also invented the silent dog whistle in 1935, since then also used to communicate also with dolphins and whales.

If you were a kid growing up in the Thirties and Forties, you'd be listening to Jack Armstrong's adventures on the radio.  Here's what you'd also need to know (even if you didn't have his official Egyptian whistle ring): 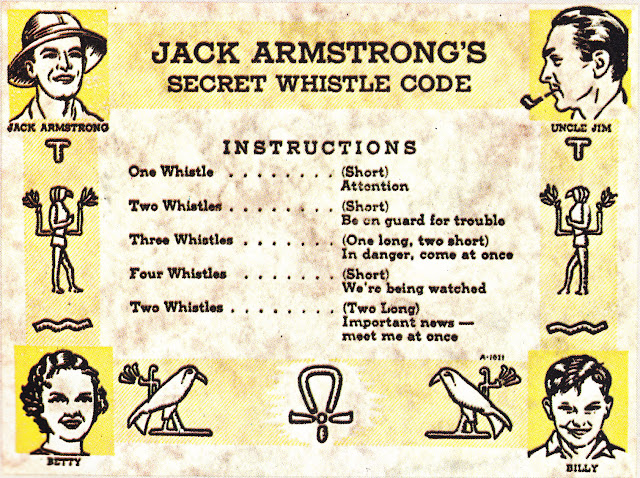 Wow :)
This is an incredible collection of ideas!
Waiting for more helpful pieces.
You would amazing to read a similar one here-
petcareio

Thank you so much for sharing with us. If you are a puppy lover and want to train your puppy in an effective way you can read this Potty train a puppy