Old office equipment incorporates a lot of history and ingenuity.  Two paper punches, a one-hole and a two hole: 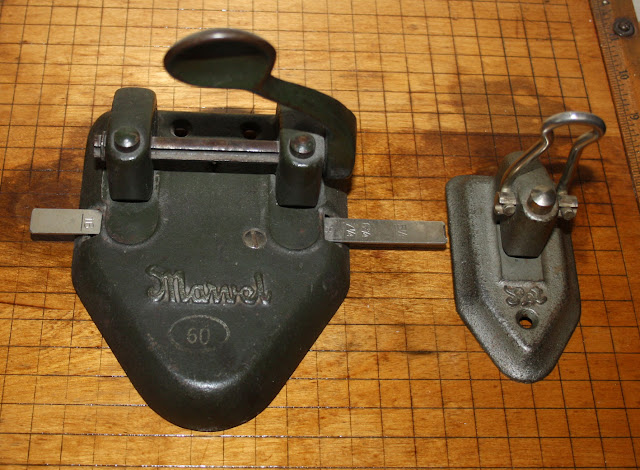 Both are ruggedly made, with cast-iron bases and well-machined steel parts and both, despite their age,  still punch nice clean holes.

Below, on the bottom of the one-hole punch.  Not often do you see "oil occasionally" on office equipment these days!

Both punches were made by the Wilson Jones Company, at that time out of Chicago.  Under its original name, the Chicago Shipping and Receipt Book Company, the firm was formed in 1893 when a jewelry repairman in Chicago invented and began manufacturing the first aluminum sheet holder.  In 1899 the company came under the control of Ralph B. Wilson, then shortly thereafter merged with the Jones Improved Looseleaf Specialty Company.  Today, the company specializes in binders and other forms of office paper organizers.

On their website, they claim to have invented the three-ring binder. In contrast, most other web sources credit a German, Friedrich Soennecken, with this invention (along with the 2-hole punch and pen nibs), with further refinement by another German, Louis Leitz.