Good Reads: Trustee from the Toolroom 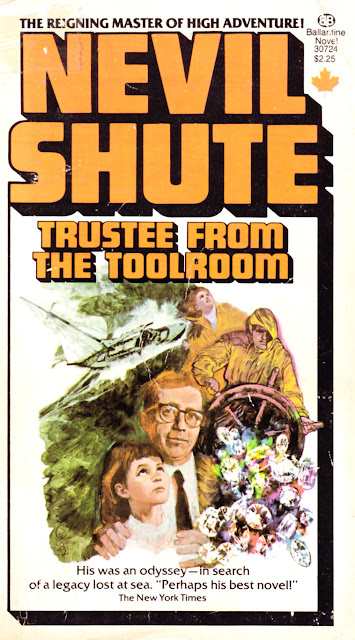 Nevil Shute Norway was both a successful aeronautical engineer and popular novelist.  In the first capacity, he worked on the British airship R100, and wrote about his experiences in his fascinating 1954 autobiography, Slide Rule.

Published in 1960, Trustee from the Toolroom was his last novel.  It's one of my all-time favourite reads.  He begins the book with the following quote:

"An engineer is a man who can do for five bob what any bloody fool can do for a quid."  Definition--origin unknown.

According to the book jacket:

"Keith Stewart's well-ordered world revolves around his home workshop where he makes miniature machines--model engines, little clocks, scale models of all sorts--and writes about them for Miniature Mechanic magazine.

Then his sister and brother-in-law are lost at sea off the shores of Tahiti and Keith sets out--without any money but making friends as he goes--to rescue from the bottom of the sea a sunken legacy for his little niece."

From the book:
"He called his front basement room his clean workshop, and this was his machine shop.  Here he had a six-inch Herbert lathe for heavy use, a three-and-a-half inch Myford, and a Boley watcher's lathe.  He had a Senior milling machine and a Boxford shaper, a large and a small drill press, and a vast array of tools ready to hand.  A long bench ran across the window, a tubular light system ran across the ceiling, and a small camera and flashgun stood ready for use in a cupboard for it was his habit to take photographs of interesting processes to illustrate his articles
The other room, which had once been the kitchen of the house, was considerably larger.  He called this his dirty workshop, but it was in this room that he had his desk and drawing board for it was usually free of oil.  Here he did what small amount of carpentry and woodworking might be necessary for his models.  Here he welded and brazed, here he tempered and hardened steel, here he did steam trials of his steam engines so that it had been necessary for him to fit an extractor fan into the window."
Posted by The Duke at 1:51 PM