I found this boarding pass in a copy of Adolf Galland's The First and the Last that I bought second-hand, along with a note about the book dated September 1982, in which the writer explains how he bought the book in an airport bookstore.  He also adds, "By the way, I read in Sunday's paper that Doug Bader died in England at age 72." 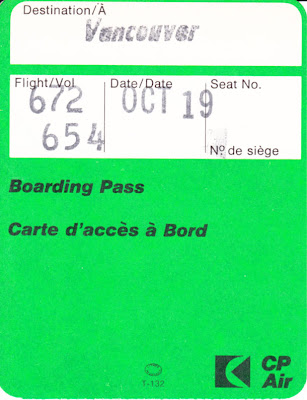 Canadian Pacific Air Lines was founded in 1942, but used the name CP Air from 1968 to 1986, after which it reverted to its original name.  The airline was sold a year later and eventually ended up as part of Air Canada.
Posted by The Duke at 11:15 AM

Back when the public had a real choice of air travel. I miss CP Air!!!