Clamp makers, out of Bridgeport, Connecticut.  A newspaper article from 1928 mentions that the factory had survived a fire, so they'd been around since at least the 20's.  They made a lot of different clamps, as my small inventory suggests: 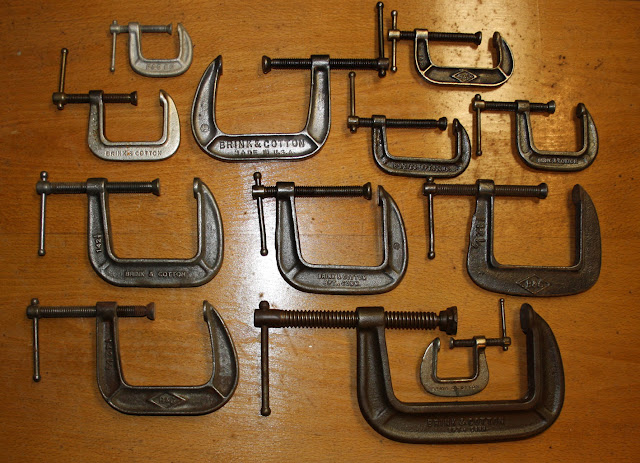 They were still around in 1966 and were reported to have invented the pipe clamp, as shown in the news item below from Popular Mechanics of that year: 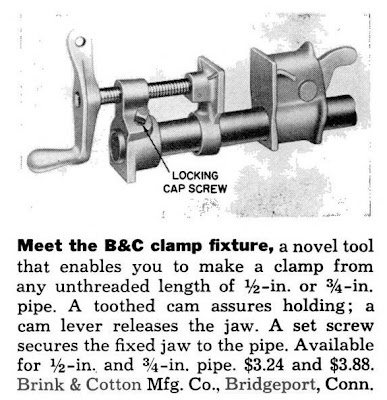 (Although, curiously, this type of clamp appears as a "bar clamp" in a publication published over a decade earlier):
Apparently, they were bought by the Warren Tool Group out of Hiram, Ohio, which also snapped up their competitor Hargrave in 1962, and Columbian vices in 1972.  Below, a Brink & Cotton web clamp made during their time under Warren control: 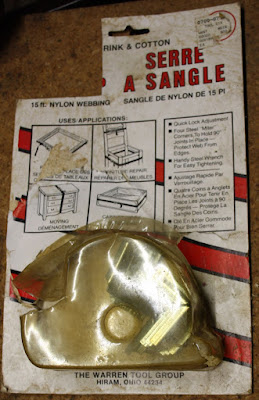 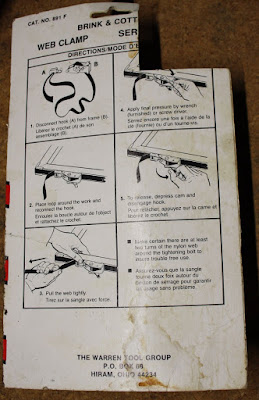 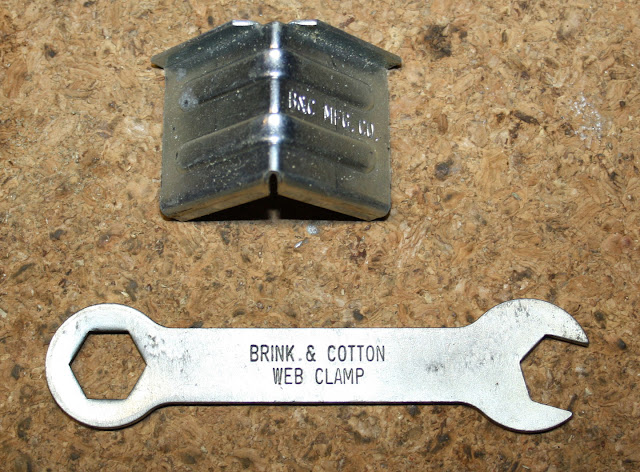 This is very interesting. I purchased a box of things at an auction and in it is a web clamp identified on one side with "Made in USA" and the other side "No.891 BRINK & COTTON MFG. BRIDGEPORT, CONN." I do not have the corner pieces or the wrench. I first thought it was just a cheap load strap, but after looking more closely realized it certainly was not a product of China. The stamped markings even have the punctuation as I typed here. They just do not make things as well as we used to in the good old USA.

I have been using this web clamp for, apparently, several decades. I don’t recall when I purchased it but I have the clamp, wrench and corner pieces. If you don’t have the corner pieces you’re not missing much. They have rounded inside corners which makes them almost useless for clamping up a picture frame or anything else with sharp corners. The web clamp has served me well for all these years. Mine is stamped “Made in Taiwan” so it is probably a bit newer than your version. I recently got a bunch of epoxy on the strap and had to replace it. Otherwise the clamp is working fine with no real signs of wear. I recently purchased a couple of ratchet web clamps that have their advantages but are bulkier than this web clamp. I will keep it in service for smaller projects. Besides, I like using older familiar tools. They have a history that gives me a peaceful confidence in my shop.

Like many wood workers I have an oddball assortment of c clamps. Out if probably 15 different makers I wound up with one B&C 6" clamp. I still notice when I pick it up during clamping operations as soon as I begin to adjust it. No other clamp comes close to it's buttery smoothness. Wish I had more.

Thanks for your comment! Good tools are great to work with.

I recently became the owner of a few hand screw clamps. The seller said he had a few jorgensen and a no name. Not thinking anything of it, it went on the clamp rack. Until about 10 mins ago when I saw the faintly printed makers mark and came upon this page after a Google search. Wish I could post a picture to share with you guys. Great blog! Appreciate the knowledge!

Thanks for the comment! You can send a picture to me at gerald@vanwyngaarden.ca and I'll happily post it!

'Ell-o
Had for years, never appreciated, a Brink and Cotton No. 606 Bridge Clamp, C-clamp, that has been around forever. I cant remember where it came from but it is like new having never been used. A bit of shelf wear but I lube it regular and run er up and back once in a while. Must weigh 10 lbs or more.
Now I can find nearly zip about this company, what they did and who were the main people. Heavy tool.
I'll look.

l lucked into a No 142-2 inch Brink and Cotton c clamp for the amazing price of .49 cents cdn today 🙂

I borrowed some “old” clamps from a friend during COVID at the beginning of my woodworking campaign. They were rusted & sized up. I cleaned them up, used a torch to loosen up the screws, & got them working again. They are Brinks & Cotton F clamps, a pair of 12”, & a pair of 28”. They are of great quality. I hope my friend forgets I have them. 😜