I recently discovered this old monkey wrench at a thrift store:

I wasn't familiar with "Frost and Wood" and assumed initially that it was probably a small tool manufacturer and that I would find little information on the Web.  How wrong I was.

Frost & Wood was the first Canadian manufacturer of agricultural implements. In 1839 Ebenezer Frost moved from Vermont to Smith's Falls, Ontario to found a blacksmithy and foundry. They manufactured plow tips, stoves, and plows. In 1846 he and Alexander Wood formed a joint company, Frost and Wood, to oversee the Smiths Falls Foundry and Agricultural Works.  They used the Rideau Canal to ship their products, but the railway came to Smiths Falls in 1859, allowing them to vastly expand their markets. By 1860, there were around 46 farm implement companies in Canada.  Frost & Wood's 1864 product line consisted of over 750 agricultural machines, plus "Drag and Cross-cut Sawing machine, Stumping Machines, Shingle Machines, Grist and Sawmill castings..."  In 1906, a fire destroyed much of the factory, which took a year to rebuild at considerable cost.  For this and other reasons, the company accumulated a great deal of debt and, to stay afloat, in 1909 it was arranged for the Cockshutt Plow Company of Brantford, Ontario to purchase 27 percent of the shares of Frost and Wood. Subsequently many of their tractor implements were made by F&W. Cockshutt Plow earned distribution rights for F&W products west of Peterborough, Ontario, while Frost & Wood took over distribution of Cockshutt offerings east of that city. In 1924, Cockshutt assumed complete control, and renamed F&W their "Harvester Division."  In the next few decades both companies prospered (F&W became the biggest employer in Smiths Falls), but both also began losing market share to American firms, especially after tariffs on American imports to Canada were reduced. During World War II, Frost & Wood production was turned over to making bolts and bushings for Lancaster bombers, artillery shells and hand grenades, so much so that the company became the largest munitions manufacturer in eastern Ontario. A very important contribution was Flax Lifter, part of which was Tow Scutcher which pulled flax fibres apart, allowing them to be spun into linen which was then used to cover aircraft wings.  After the war, the company's fortunes declined, to the point where employees began calling it "Fret and Worry."  In 1955, when it was announced that the factory would be closing its doors, many employees broke windows and tossed their tools down into the Rideau Canal below.  The factory was completely demolished in 1961, and its site was redeveloped as a shopping mall and hotel.

The Heritage House Museum in Smiths Falls and the Virtual Museum of Canada have jointly developed a virtual exhibition:  The Legacy of Frost and Wood:  Outstanding in Their Field.

I actually visited the Smiths Falls museum, to learn that the wrench above would have been supplied with an agricultural implement made by the company, and not sold separately. 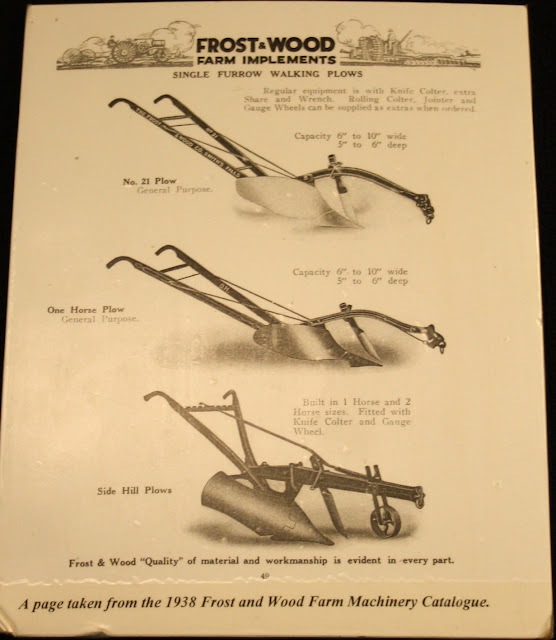 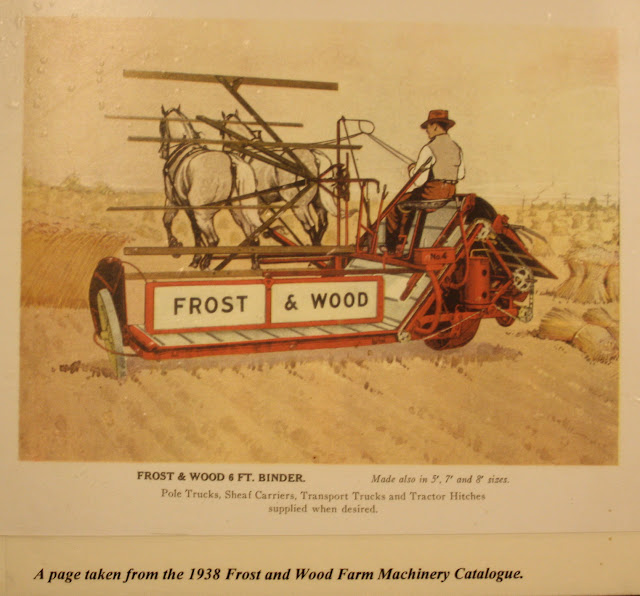 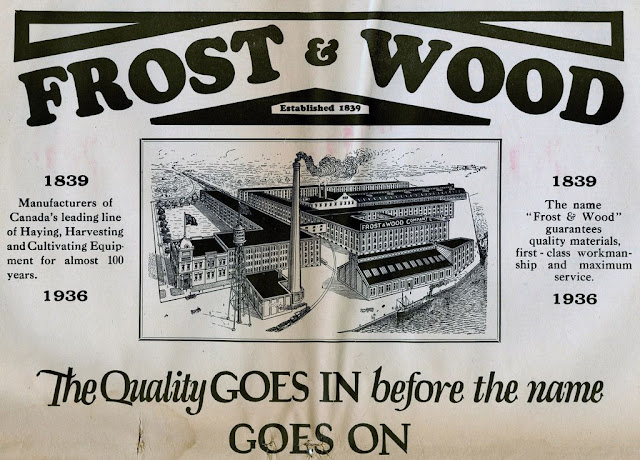 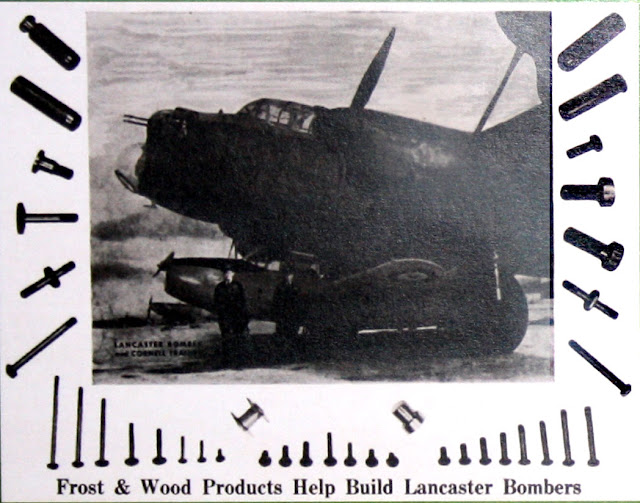 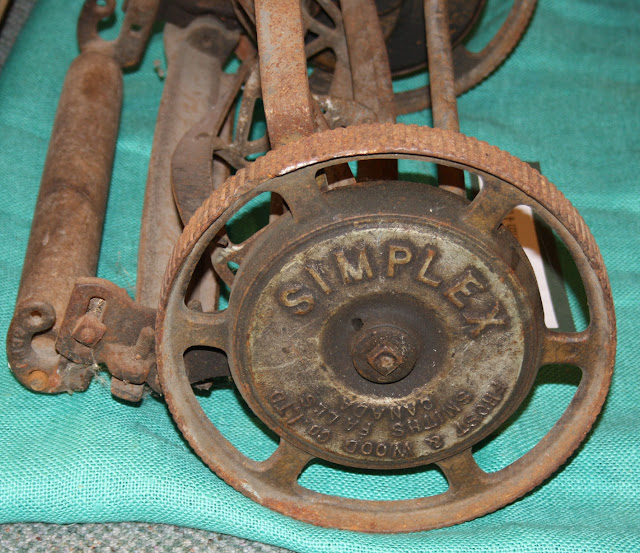 Above, lid for implement tool box. 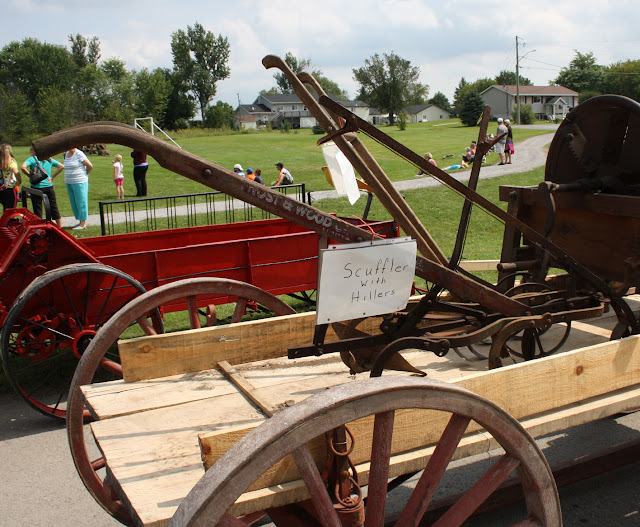 Above, a scuffler seen at a local fair. 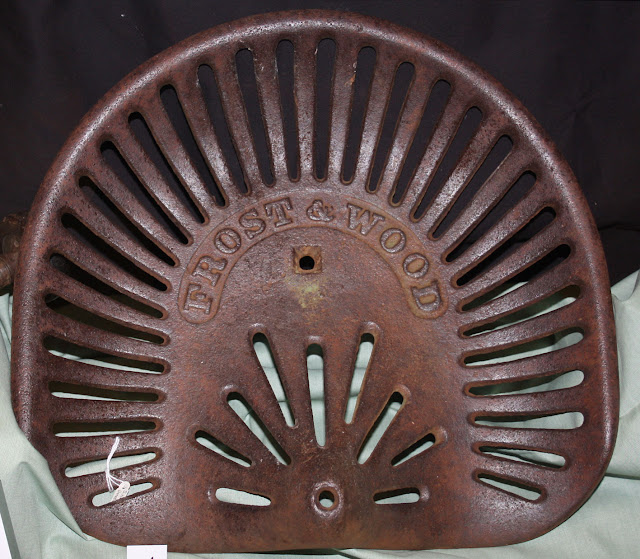 Above, seat for horse-drawn implement.  This was said to be one of the most important improvements in agriculture, since the farmer could now do his work seated and concentrate on controlling his horses and implement.
Posted by The Duke at 11:13 AM

I have a Frost and Wood Simplex push mower (as show above) - I was wondering if you might know what this item is valued at. It is in great condition

Sorry, we're just interested in this stuff, and not appraisers. You'd need to search around sites like Kijiji and ebay to find what sellers are asking. I doubt that there's a large collector's market for such items, though, so don't be surprised if the asking prices are lower than you expected.

Hi Karen,
Do you still have the Simplex push mower? If so could you contact me at dancassidy21@gmail.com?

i have the same pipe wrench, if anyone want it contact me boucherstef@hotmail.com (scuse my english i speaak french)

i take offer for it.

I have the very same implement tool box cover if there is a collector interested in purchase. Ken