Below, a screwdriver from the old toolbox my dad kept at his cottage:

It was marked "Rosco" on the handle.  Unfortunately, it was also covered with gray paint, which I stripped off, along with the name.  Turns out that methylene chloride is not kind to acetate.  Who knew?

Screwdrivers under this name were initially made by the Rosenberg Bros. & Co. out of Smithtown, Long Island:

If they really did sell one screwdriver every six seconds, they sold a lot of screwdrivers.  (Do the math--over 5 million a year!)  They also tried to keep innovating (although ratcheting screwdrivers weren't really anything new):

We can see, with the benefit of hindsight, that the pistol-grip handle did not catch on.

One claim to fame was that, in May 1967, the company's regional sales manager appeared on the CBS TV show, "What's My Line?"  Her line was "sells screwdrivers."  The show was cancelled the same year.  Coincidence?

The company was bought by Vermont American in 1974, which continued to offer screwdrivers under the Rosco name, as the 1983 newspaper ad below attests: 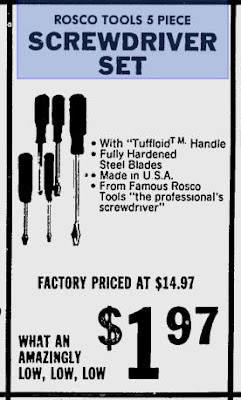 Note that, under VA's ownership, they're now referred to as "the professional's screwdriver" compared to their original motto of "America's Greatest Screwdriver Value."  Anyway, the name has now disappeared, which really doesn't matter given VA's race for ownership of the bottom of the tool quality market.
Posted by The Duke at 10:10 AM

Still have my giant "Two Hand" Rosco screwdriver -- the last remaining piece from a set I purchased just our of high school in 1980. The shank looks as if it's pot metal -- but after 33 years of hard work, it still looks essentially the same as when I bought it when I was 18.

Incidentally, I purchased mine at the Tool Shack, a dump of a place in the San Fernando Valley (CA).

It was fun to find this article and see the Rosco name -- as well as the old ad.

I worked there in the early 80's. It was already Vermont American by then. We made screwdrivers for everybody including Stanley and Craftsman. There's a hardware store there now with the Rosco Tools name, started in 2010, according to the web.
I made my own screwdrivers from reject handles and blades and I still have some. They're indestructible.

I have three screwdrivers identical to the one shown in the picture. I think they were passed down to me from my grandfather. I have had them in my toolbox since the mid-1970s. They are amber in color. I know from experience that they also melt easily as one grip was damaged while i was working on a car.

I have a blue handle one I got a garage sale sometime back. A little rusty but my favorite screwdriver.

I worked there in Smithtown somewhere between 1979 and 1983. I was in charge of oiling all the machinery on second shift. My wife also worked the same shift. Still have some of the drivers. My favorite ones were the nut drivers. Learned a lot . Black handle screw drivers were the cheapest. They didn't hold up well. Cleat gander or see through were the best.

My name is Keith Happ I worked mostly the 3rd shift but occasionally I worked the 2nd shift. Bob & George worked on the 2nd shift and one night we talked about how the building was a dairy farm and the lathe area is where they milked the cows. Georg and Bob mentioned a vision of a guy in overalls we referred to him as Jethro.

My grandparents worked at the Smithtown location, Tula and Theo along with some of my other relatives. I have a number of Rosco tools from them.

pictures and stories always welcome, I'll add them to the post.