I have found that old drill bits provide one of the best records of vanished tool makers, a sort of "Who's Who" of our grandfathers' tool makers.  I suppose this was because so many firms produced them to meet the huge market for these tools, which were so essential in the building of the country when wood was the primary construction material.

This will be the first installment of a short series of posts on various kinds of bits and their makers.  Readers interested in a more comprehensive coverage could not do better than to visit Stephen Shepard's "Back and Forth on Reciprocating Bits"  on his  Full Chisel Blog.

Below, from some of the old woodworking books in my shop library: 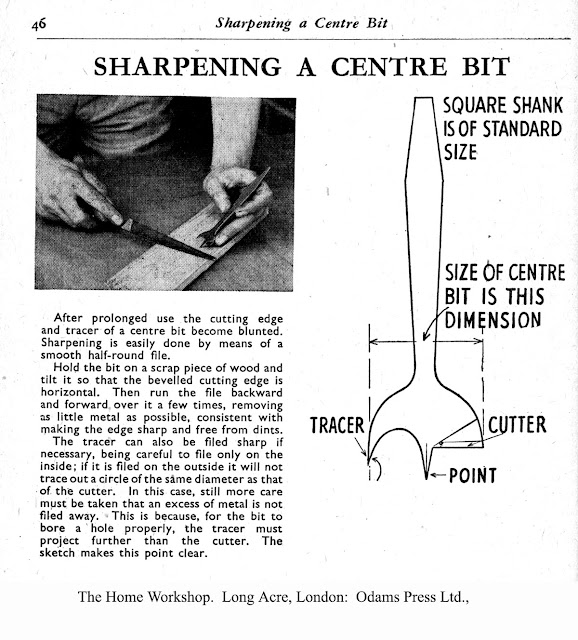 Below, the collection of centre bits I have managed to acquire over the years:

This type of bit is used for boring shallow recesses or pockets in wood, where the hole is not drilled all the way through the wooden piece.

Among my bits, the following manufacturers are represented:

The Snell Manufacturing Company, out of Fiskdale, a village in Sturbridge, Massachusetts, has the distinction of being the oldest maker of augers and bits in the United States.  Meville Snell came to Fiskdale from Rhode Island and began making auger bits in 1841.  Over the succeeding years, other family members got involved, and the company name evolved from Smith, Snell & Co. through Snell & Brothers.  When Deacon Thomas Snell got involved in 1854, he used to load a wagon with finished tools and go to Boston.  When they were sold, he would buy enough steel stock to refill the wagon and return to his factory.  In 1862, the business was purchased by a partnership which included the New York hardware firm of Clarke and Wilson.  Over the course of the company's history, its factory was destroyed twice by fire (a common occurence in this type of manufacturing).  The company went out of business in 1930.  For some great photos of their factory in its heyday, visit Digital Treasures.

Thomas Ibbotson & Company were a maker of edge tools, particularly woodworking tools and pen knives, operating from as early as 1852 in Sheffield, England.  The company was purchased by William Marples & Sons in 1905, and the factory closed down 4 years later.  (Note that the tool is also stamped "cast steel." “Cast steel” refers to crucible steel which was more uniform in composition and more free from impurities than any previously made steel.  It was created by Benjamin Huntsman near Sheffield in the late 18th century.  Huntsman had not patented his process and it spread to other steelmakers after his secret was uncovered by a Sheffield iron-founder called Walker. According to a popular story, Walker got admitted into Huntsman's works in the disguise of a starving beggar asking to sleep by a fire for the night.  Once in, the industrial espionage was carried out.)

This firm dates back to 1835 when James Howarth established a partnership with Henry Taylor making light edge tools at the Broom Spring Works in Sheffield.  Taylor left in 1842.  Products were awarded high prizes at the London Exhibitions in 1851 and 1862, and at Paris in 1855.  The firm became James Howarth and Sons in 1863.  The firm was discontinued in 1913, and the mark was acquired by Robert Sorby and Sons in 1922.   (Robert Sorby continues to exist today as one of the few remaining British makers of edge tools.)

L.H. Turtle Ltd. was a hardware business and ironmongery in Croydon (now a borough of London, England) started in by Louis Henry Turtle 1894. It would seem that it had enough clout at one time to have its name stamped on some of the tools it sold.  Sadly, it closed in Christmas 2008, the victim of an economic slowdown in Britain and the plans for a shopping mall that ended its store lease.   The founder’s grandson, who managed the shop, stated,  "I want to retire and there is nobody else in the family who is interested in taking over, so there is no choice but to close.”

Boker Tools trace its roots back to the Boeker tool factory in Remscheid Germany established during the 17th century.  A huge chestnut tree that shaded their original factory became their "Tree Brand" symbol used on their knives and scissors (below):

This is distinct from the arrow symbol which they used on their edge tools.  In 1829, Hermann and Robert Boeker began producing sabers to meet the demands of the unstable political situation in Europe (eventually also supplying many sabers to the Americans during their Civil War).  In 1837, Hermann emigrated to New York City to found H. Boeker & Co., and Robert did the same in Canada and then Mexico, founding Casa Roberto Baker.  Their cousin Heinrich went to Solingen to found Heinr. Boeker & Co. in 1869  Eventually, the American company’s name was simplified to H. Boker & Co. and American production of pocket knives and pliers began after 1900.  During World War II, the Solingen factory was completely destroyed.  It was rebuilt and today the company continues to be well known for its knives.

As an interesting aside, Wiss Tools (founded in 1848 in Newark, NJ by Swiss émigré Jacob Wiss) bought Boker USA in 1969 and, while they owned them, made them stop importing scissors from Germany to reduce competition for their own scissors.  Wiss was eventually bought by Cooper Industries, who eventually helped Boker regain the American rights to the tree trademark that had been taken from them following the Second World War.  In 1986, Cooper sold the U.S. rights in all trademarks to Heinrich Boker & Co. of Solingen, which is now the parent company.
Posted by The Duke at 9:49 AM