Many decades ago, I saw a machinist's chest including tools advertised in the local Kingston newspaper.  I phoned up to find it was still available and immediately drove over to see it, imaging that every other car on the road was heading to the same place.  The old gentleman who was selling it had been a machinist in Detroit and had retired to Kingston.  As I recall, he wanted $50.  As we were going through the drawers, each one filled with Starrett or other quality precision measuring instruments, the phone rang.  I told him that if it was someone inquiring about the chest, to tell them it was sold.  He later told me only one other person had shown any interest, who had a son enrolled in a machinist's course.  He had looked at the case and tools, but then had left to think it over.  Fool!

The chest body was covered with ratty oil cloth, which I removed and then cleaned and refinished the pine underneath.  The drawer fronts are made of walnut.  It still has the original key and lock, which work.

I ended up losing the chest to my wife, who wanted it as a jewelry box, but I eventually was able to replace it with another chest (but that's another story). 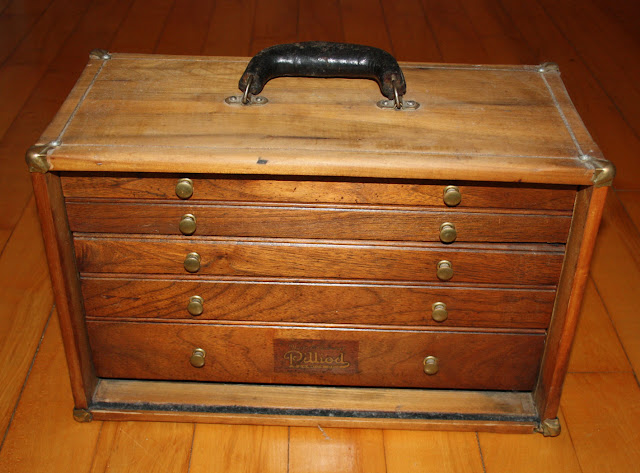 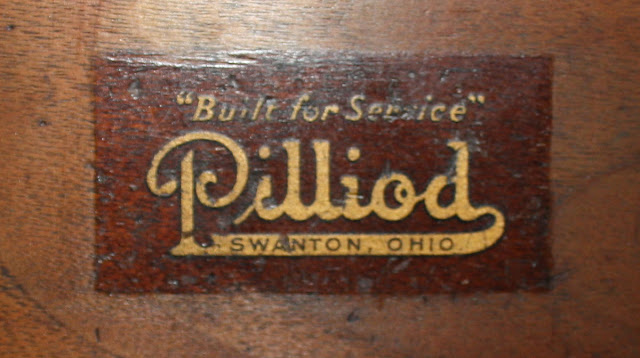 At the beginning of the last century, industrial development was in full swing in North America, and machinists needed tool boxes.  There were at least 50 companies in the U.S. and Canada that catered to this trade, and of these at least 5 to 6 were located in Ohio.  One was the Pilliod Lumber Company of Swanton, established by T.J. Pilliod in 1896.  In addition to their "Built for Service" line of tool chests "for  Machinists, Carpenters, Salesmen, Repairmen and Fishermen," they made jewelry boxes, silverware chests and, during the first World War, boxes for military medals.

Later renamed the Pilliod Cabinet Company, with branches in Alabama and South Carolina,  the company moved into the production of bedroom and occasional furniture, apparently joining the trend of using particle board by the 70's and 80's.  In 1994, with $30 million in debt, the company was acquired by LADD Furniture Incorporated of High Point, North Carolina, at the time the fourth largest North American manufacturer of residential furniture.  LADD renamed it Pilliod Furniture.  LADD managed to rack up over $100 million in debt by 1999, at which point it was acquired by La-Z-Boy.  In the face of steep Chinese competition in the furniture business, this turned out to be a disastrous move for La-Z-Boy, which in  2001 re-sold the Pilliod company to Michels and Company of South Carolina, becoming Michels-Pilliod Furniture of  South Carolina.  This has since apparently gone out of business.

The Pilliod company is long gone from Swanton.  However, two venerable Ohio tool box manufacturers are still alive and kicking:  Gerstner (which started in Dayton in 1906) and Kennedy (which has been in Van Wert since 1911).

As an aside, the Pilliod Cabinet Company should not be conflused with the Pilliod Machine Company of Swanton, which made the Baker valve gear for locomotives and steam engines. There are some very nice photos of a machine shop floor posted at the first of the two links for this company.
Posted by The Duke at 9:09 AM

I just inherited a heart-shaped Pilliod box in near-perfect condition. This is great information. Thanks for posting.

The photos shown above show beautiful woodwork. I have never heard of your company before today but I have recently moved and inside a box I found a partial label with your company name & address. Do you offer a catalog with the products you make and sell? If so :My email address is denisemsweener@gmail.com . Please let me know if you have a catalog and what is the cost.If you have a phone number I can call please send it to my email address. Once I recieve that information I will gladly place an order. Thank you....HAPPY HOLIDAYS.

I used to work at the Pilliod Cabinet Company in Swanton, Ohio. I remember when they moved it to Alabama. We used particle board at that time to make the furniture and plastic for trim and door fronts. They should have stuck with real wood to make beautiful pieces like this toolbox and the jewelry boxes you mentioned.

I also worked for same company in Swanton Ohio in 74 to 80 i believe. I was very proud to work for these people i was under Julis Poka at frist. Than move me to maintainas. With Mr.Jim Blake great bucnh of men .move cuz of cold weather But yes i was there Forklift mechanic till i left .my name is Roy Lozano if any friends remember me well Lozanoroy7@gmail.com Thks. God Bless iam 64 now

I'm a collector of Lane miniature cedar boxes. I have a working hypothesis that Pilliod made the first cedar boxes for Lane back in the 1920's based on comments from one of their executives at the time. Lane later went on to make millions of miniature cedar chests in Altavista, VA. I combed the Lane archives and can't find the connection. Sure wish I could know for sure...my website is lanecedarbox.com. Thank you,
Chad

Hi my name ia Patricia Miller. I work for Pilliods in 1978 and i started my 401when i workes there and forgot about it. So when i started drawing my social security they told me i had money in my 401k qnd i need to know who i need to talk to about getting my 401k . Thank Mrs. Miller my phone number is 843-618-4722