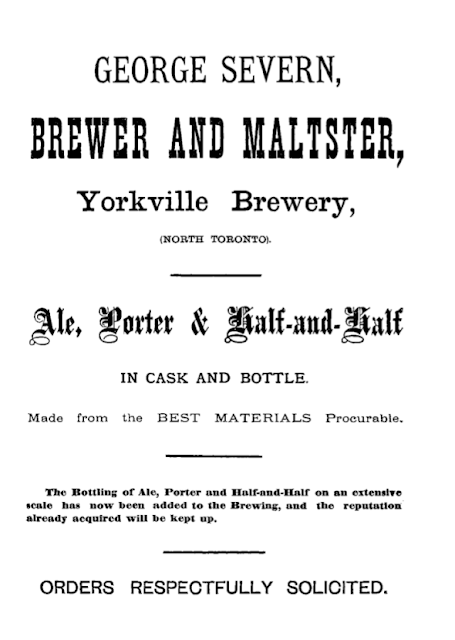 The Yorkville area in Toronto is now an upscale shopping district but in the early 19th century it was still a developing rural area north of the city.
In 1832 25 year old John Severn established what was considered to be the first brewery in the city on the NE corner of Yonge and Church St. He was successful and within a few years was producing enough beer to require the building complex shown. The brewery occupied a 5 story building of some 90,000 sq ft, the malt house, 12000 sq ft. Severn was known for producing a quality product and when he became dissatisfied with the water from Severn creek for brewing, he constructed a wooden pipeline from Summerhill a mile or so north for a new supply.
In 1854 Severn, originally from Derbyshire, England, moved on to California leaving his sons to run the operation. After setting up breweries in California and Iowa he returned to Toronto in 1863, and ran the brewery till he passed away in 1879. By this time the brewery employed twelve men producing 6-7000 gallons of ale and porter each week.
According to the article in the Toronto Daily Mail of June 30 1884 below, his son George was once again running the business.
No details on the demise of the enterprise (I suspect Prohibition) or when the buildings were demolished. The site is now a large Canadian Tire Store.
﻿﻿﻿