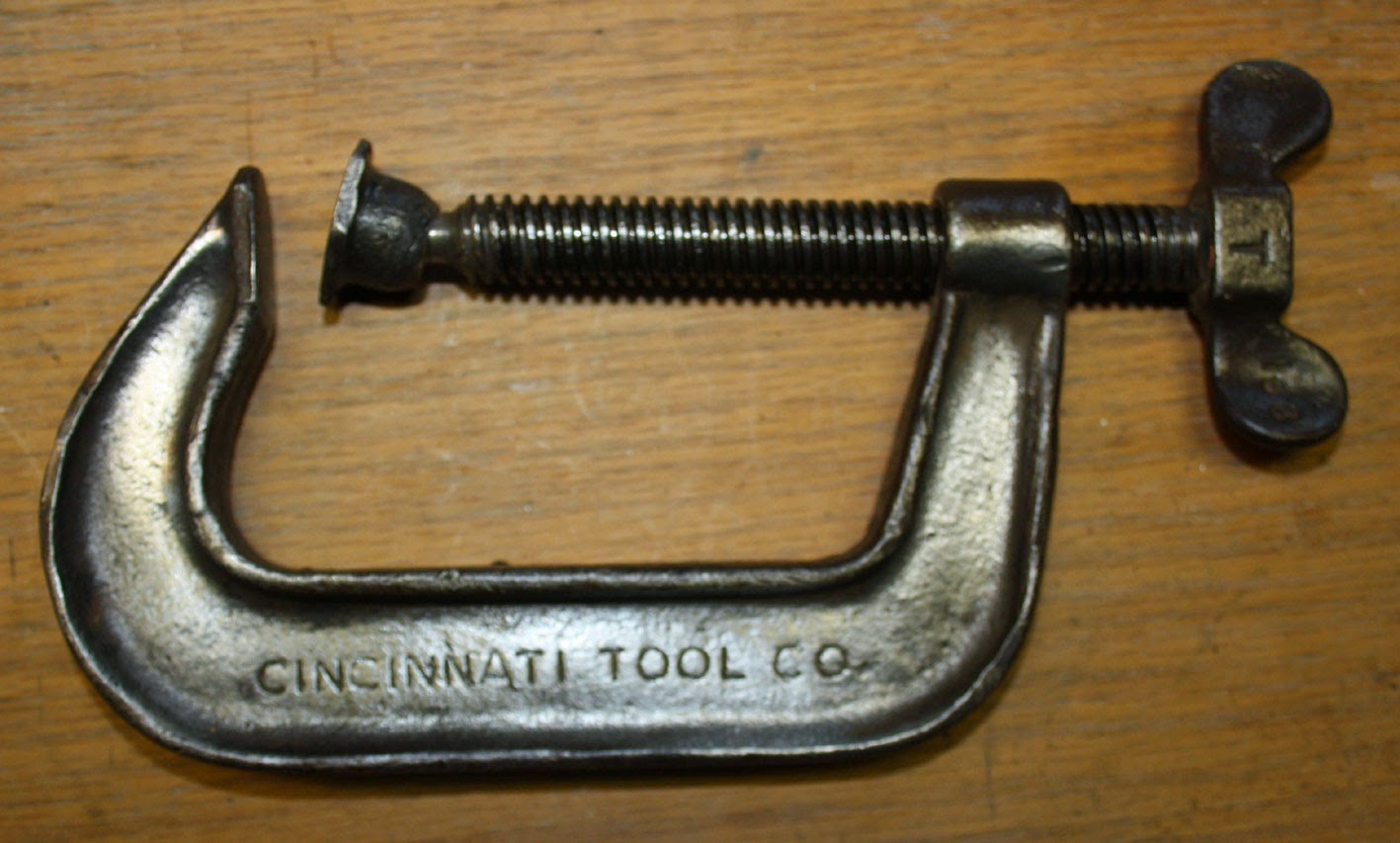 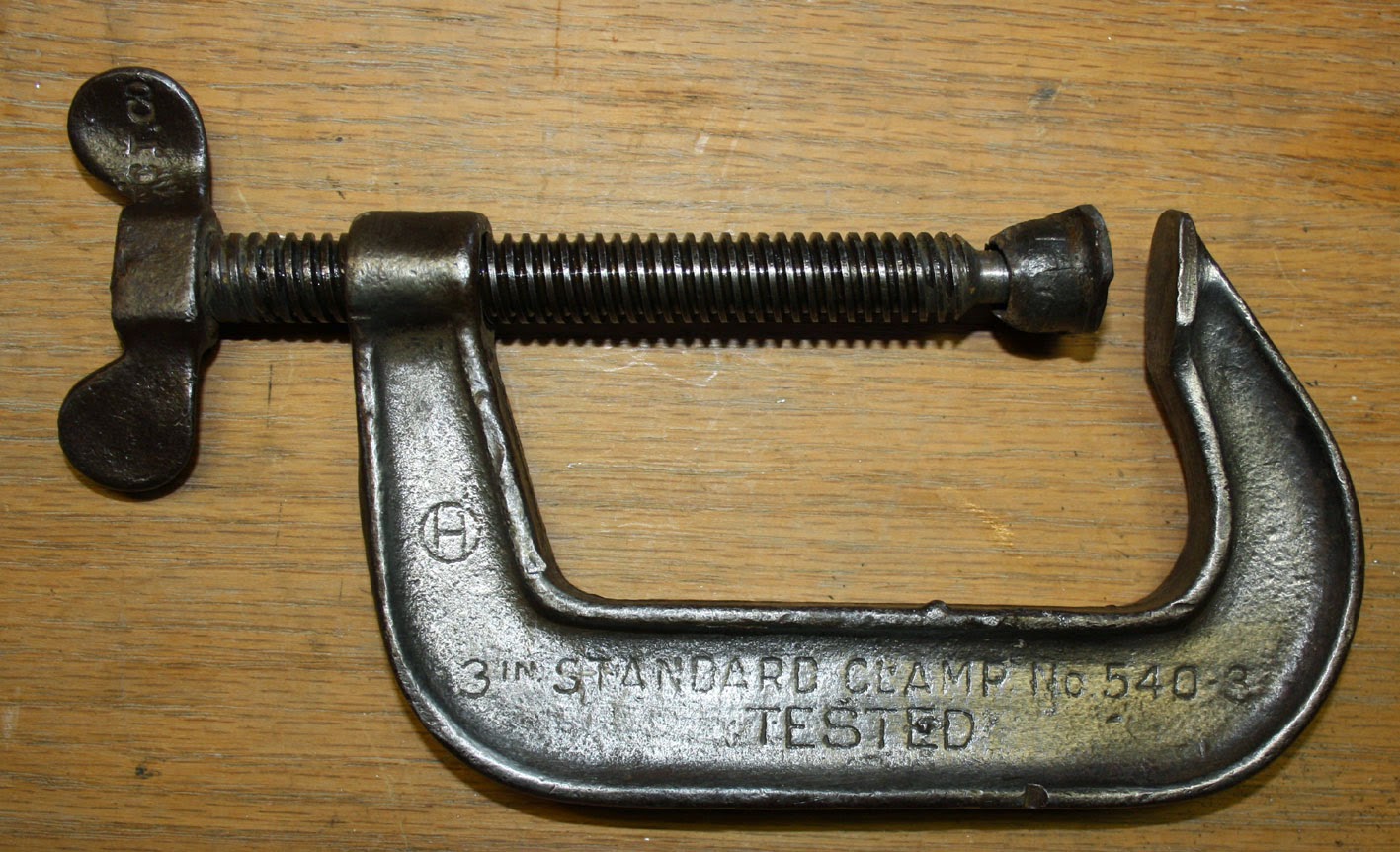 Above, a No. 540 3" Hargrave clamp. Note the detail stamped on the wings of the screw nut: 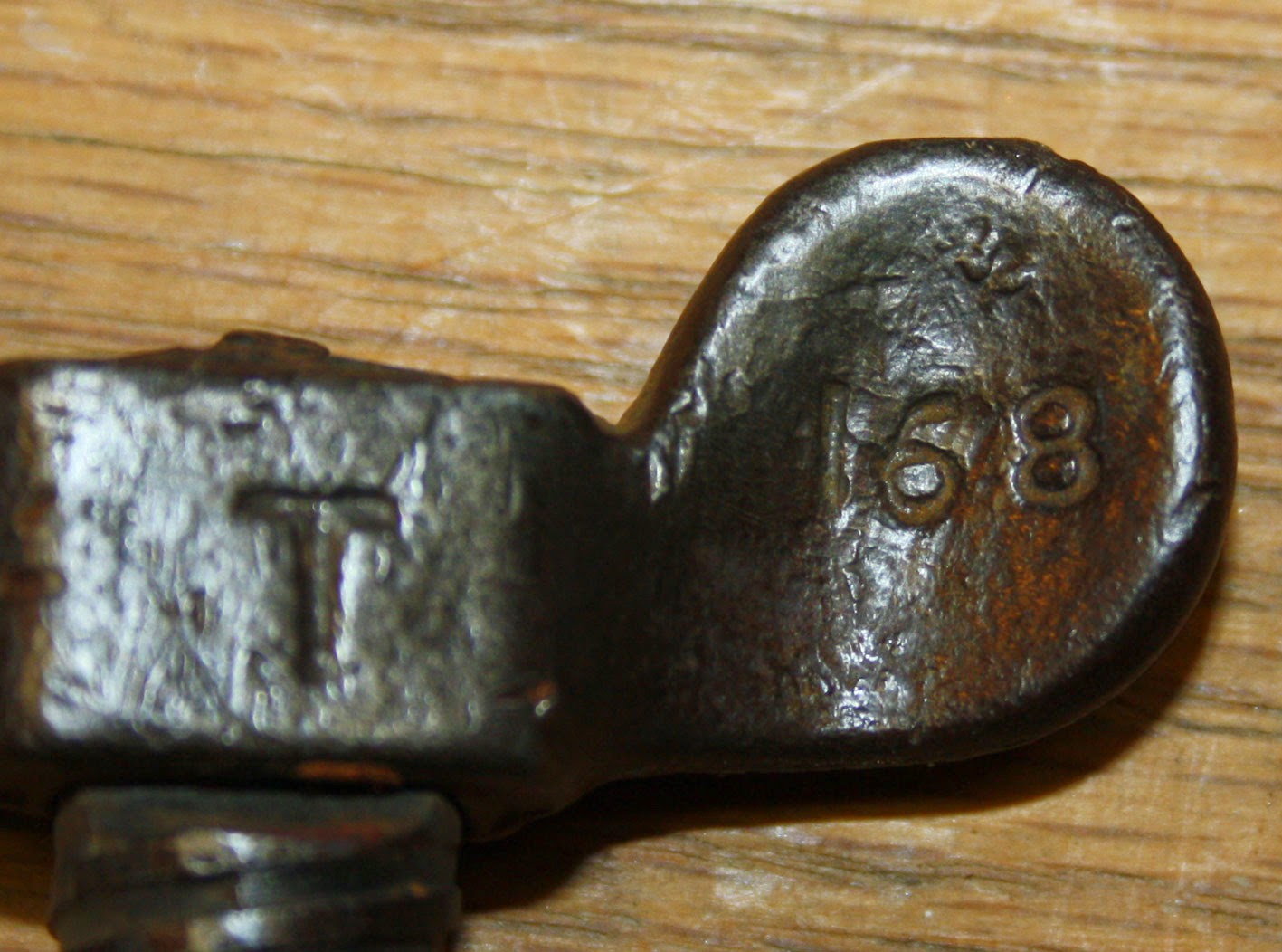 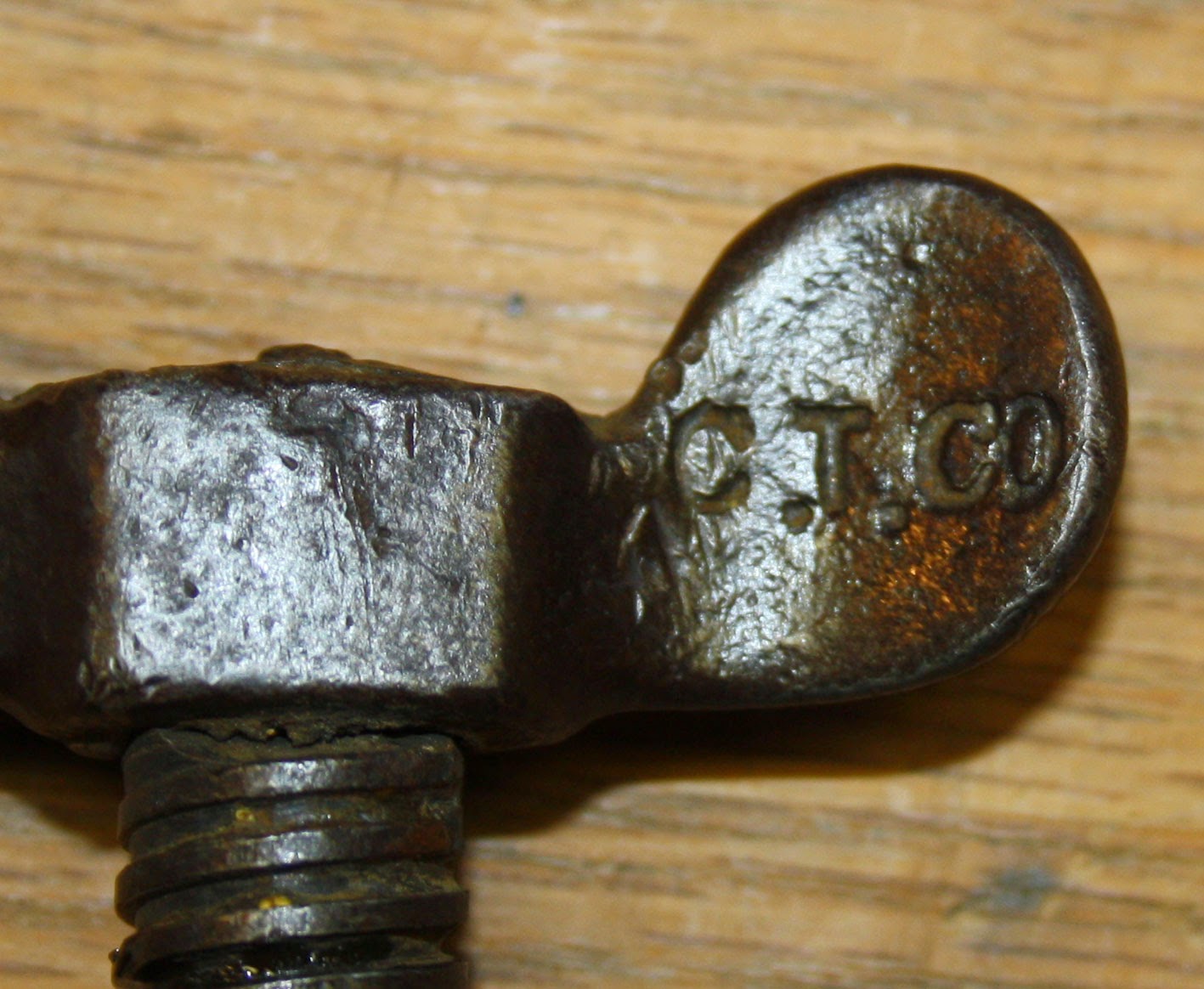 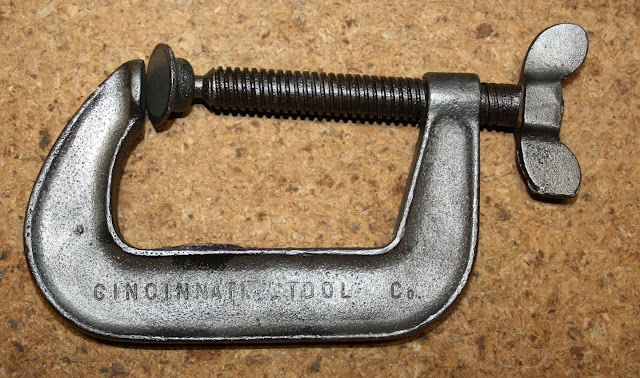 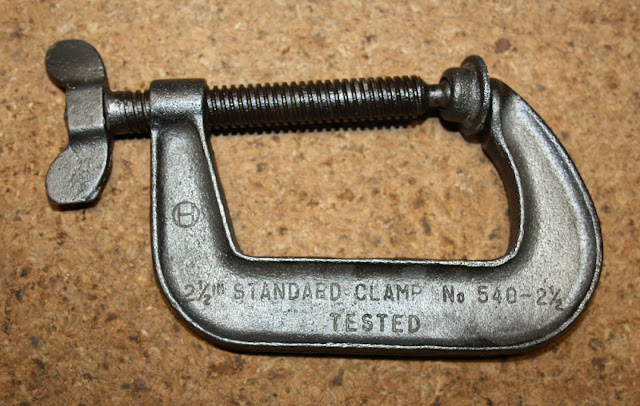 Below, their Super Jr. clamp series. 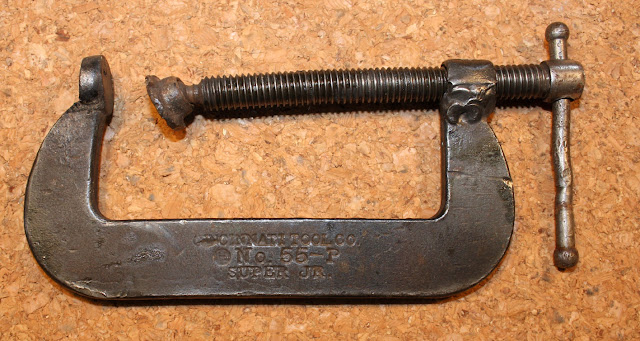 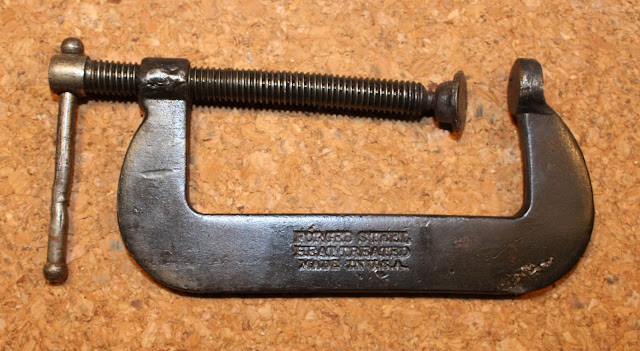 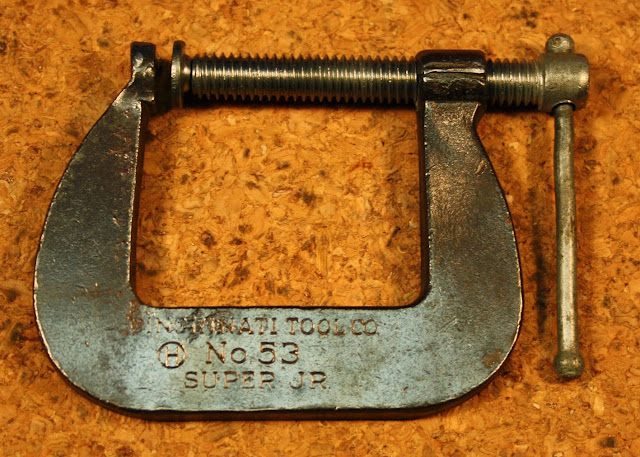 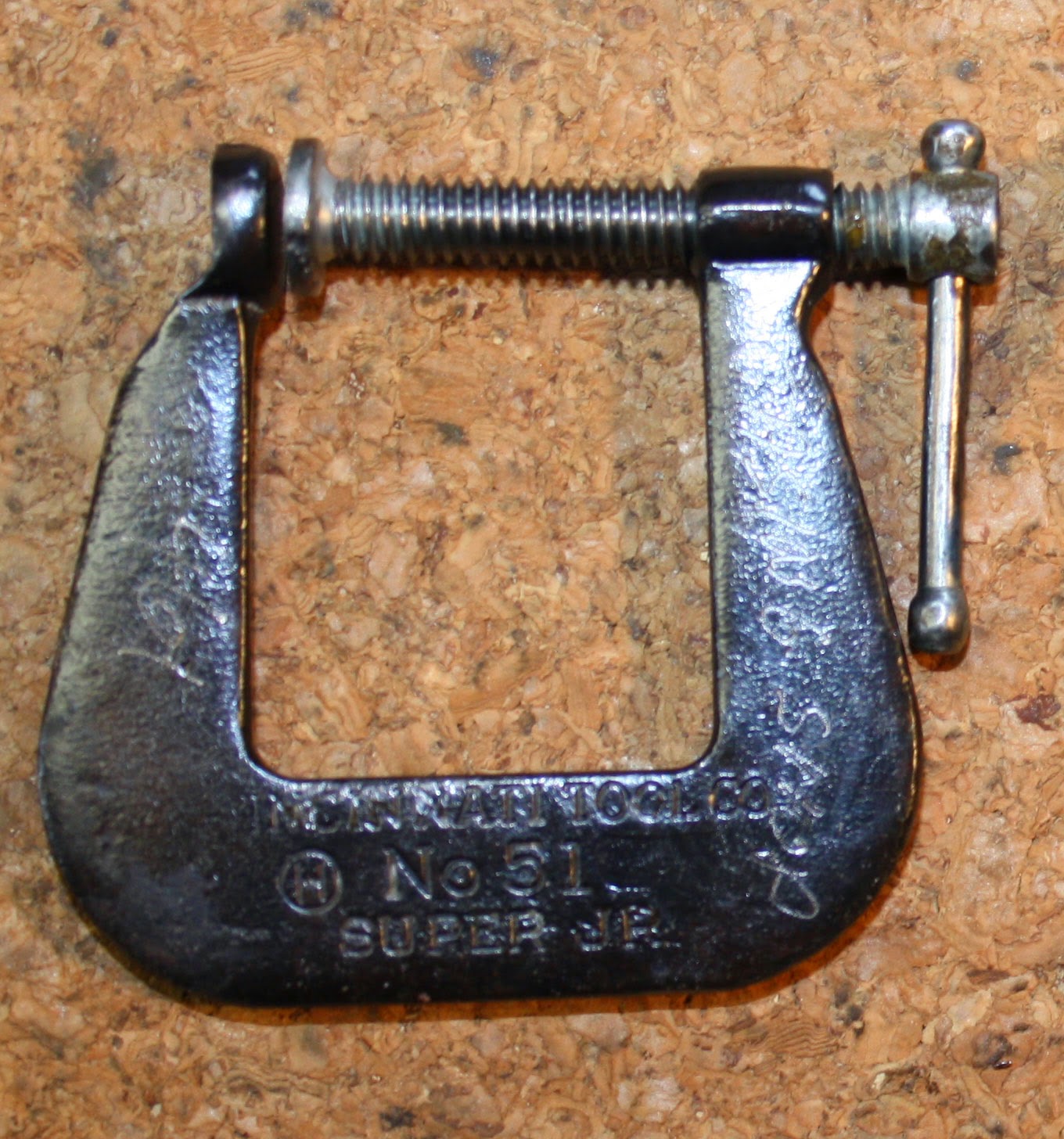 Below, other of this company's clamps in my shop, demonstrating the range of their C-clamp offerings: 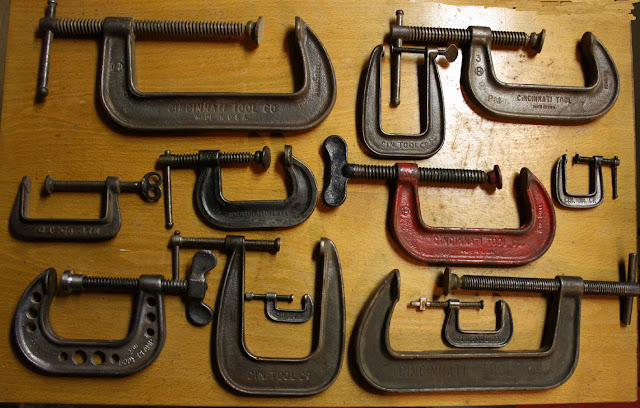 They even had a offering in the economy class,  stamped "Cin Craft" clamps with the body made in two pieces and spot welded together: 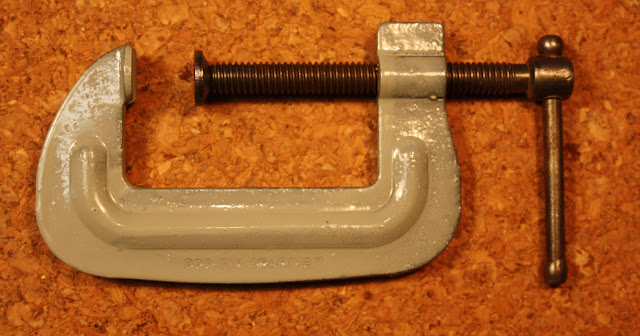 The Cincinnati Tool Company was founded in 1877.  By 1911 or 1912, Edward Hollister Hargrave who was running the company passed away.  His son, John Morris Hargrave, who had recently graduated from M.I.T., took over the helm.  In 1924, the company officially became the Hargrave Company. 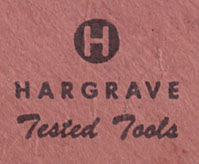 A circled "H" on the tools indicates that it was designed by John Hargrave. 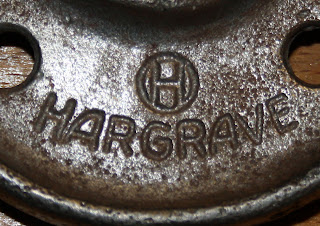 In addition to bar, C- and wooden jaw clamps, in its heyday the company also made cold chisels, star drills, spokeshaves, bit stock, clamps, pliers, punches, chisels, box scrapers, saw vises and machinists tools. In 1962 it was acquired by the Warren Tool Group (which also gobbled up Brink and Cotton). 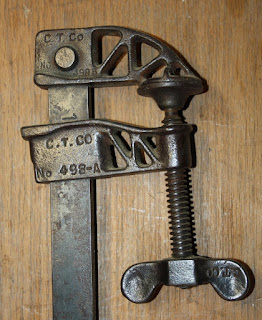 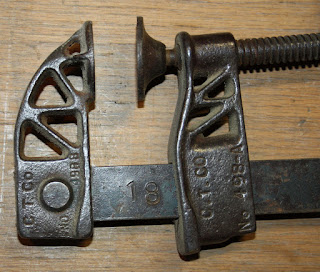 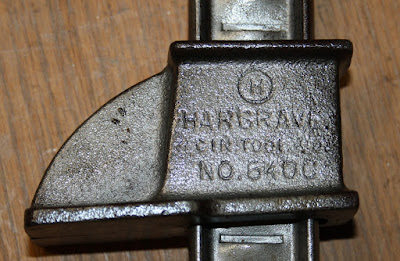 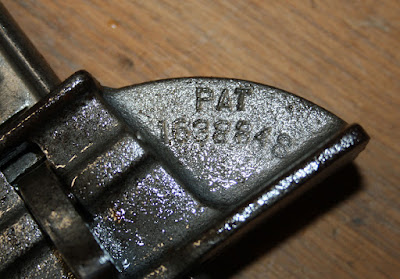 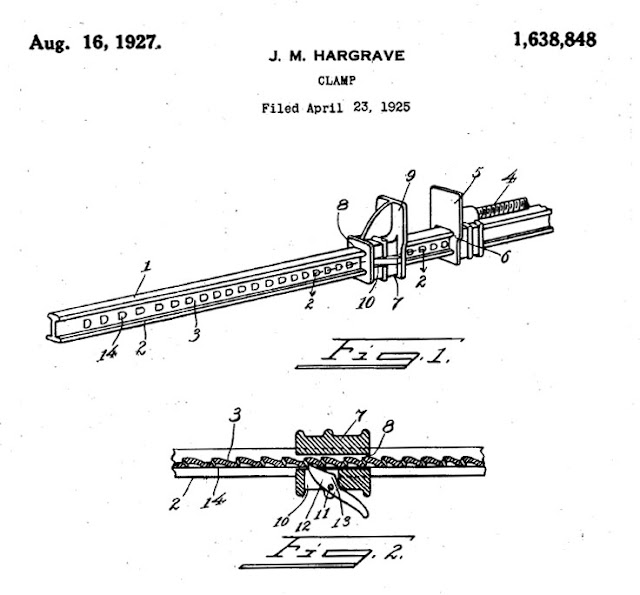 I have a Cincinnati Tool Co. No. 55-P Super Jr. C-clamp inherited from my dad that I have used frequently over the years. I decided to do a search online and found your blog entry. Thanks very much for this wonderful post!!

I have a file cleaner No 364; that shows the range of specialized tools H was making, it is a combinaison of wood, steel and textile.
Your collection his great.

I also have a collection of No. 640 bar clamps, and I appreciate you sharing the patent diagram photo.
Do you or anyone know the size of the threads used to hold the clamping block (5) to the threaded rod (4). I have had a very hard time determining the size of the thread of the set screw that holds it together!

Anyone have info on the very early "CT CO" clamps I have a really sharp pair of 1-1/2" cintys with the early double hole style thumbscrews. If anyone could give me a reference to a catalog that dates this style ect I would be very grateful as I have not been able to.

I'm dismantling my dad's tool room, which until his death never wanted to destroy them. Today I was cleaning and painting the clamps, one of them number 12 is from Cincinatti tools, with the inscription H
and the details it describes.
It is a pleasure to see that they were manufactured conscientiously, of quality, for life.
Thank you for this beautiful page. from Argentina