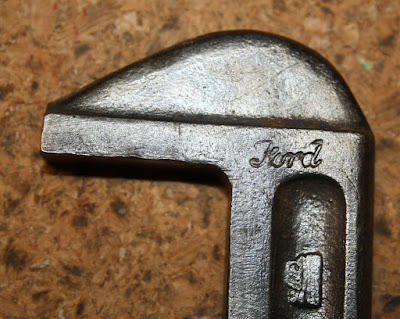 its nice to find some history of this vintage spanners.As a vintage vehicles restorer i also collects snail brand spanners.strangely,i have got two different number ten spanners.two different set up of sizes?both are of the same model as i see from the design.

I've come across a couple of Snail Brand spanners at the local flea market.
They looked/are really good quality. So I had to have them. Only cost a pound each. I'll be looking out for more.

I have a wrench with just the snail pointing left. Is this specific to certain years?

We don't know, they seem to face both directions, but no idea why!

I have just found a surface rusted SNAIL wrench that according to details elsewhere is a "Q" wrench but has what looks like "(W)" on handle so possibly not a Q offering?
Has "SNAIL BRAND" on one side of handle and Made in England on the other.
Obviously old and well used but today cleaned (not overly) and greased and oiled and ready for more work. I have NEVER heard of Snail brand until today and then looked up the origins.
Thanks Folks.

Patricroft Accessories''' Any Knowledge anyone ??

I have an S-shape Snail Brand spanner in my Snail Brand tools collection. I have been collecting Snail Brand tools for a couple of years and in all this time I haven’t seen another for sale or been able to find any other photo or information on one.