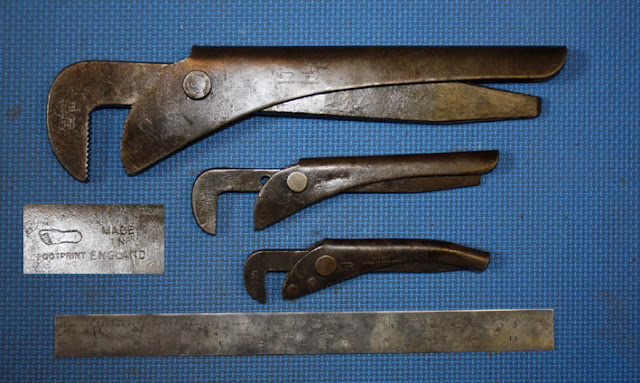 Above, my collection of Footprint pipe wrenches.  Simple but clever.  It was apparently designed in the 1875 to help remove the old style grinding wheels that were in common use in Sheffield, and then it's popularity extended to other uses by tradesmen.  I can personally attest to its usefulness in a pinch.

The company's roots go back to 1760 when Alfred Ridge & Sons was established to supply wood boring tools to the Royal Navy. The Footprint brand itself originates from 1875 when Thomas R. Ellin, a member of a cutlery manufacturing family, started a tool manufacturing business under the brand “Footprint”. This subsequently became known as Thomas R. Ellin (Footprint Works). The Footprint logo is said to have been inspired by the Daniel Defoe's novel, Robinson Crusoe, and the footprint the main character saw on the beach after he was stranded.  (There's nothing like a classical education!)  Below, from the company's previous website:

In 1932, Alfred Ridge was bought by John Jewitt Senior, who then bought the Thomas R Ellin (Footprint Works) Limited in 1948, which was operated independently of Alfred Ridge by his son John J Jewitt who began to manufacture a range of tools under the Footprint, Domino, Climax, John Bull and Clinker brands. In 1950, company acquisitions included John Bull (edge tool makers), C. H. Jenkinson (cold chisel & bolster makers), Stockport Tool Co. (hand drill makers) and Charles W Bacon (wooden handle turners). In 1958, the ten millionth Footprint pipe wrench was produced.  In 1966, Footprint was the first company in the world to create full length forgings of cold chisels and bolster. Two years later, all of the companies owned by the Jewitt family were merged into one and the name was changed to Footprint Tools Limited, trading under the brand “Footprint”.  In 2006, Footprint bought the machinery, stock and order book for Whitehouse, the Midlands-based hammer manufacturer.  In 2008 Footprint moved from their original site in Hollis Croft (where they had been since 1900) to a new, larger factory in Owlerton, Sheffield (the "Admiral Works") and invested in new forging equipment, but this process was interrupted by a global recession, and Footprint was unable to generate enough business to cover the cost of the upgrades. In early 2009 the company was forced to liquidate and lay off its staff in order to pay creditors. The Jewitt family retained the brand and intellectual property, and later that year revived the company under the name Footprint Sheffield, and began producing a smaller range of products at first.

With the same family of owner managers, now run by the fourth generation, in 2015 Footprint continues to manufacture most products in Sheffield, England and exports worldwide.

However, the current company is not without its challenges. According to Ian Jack in a November 2017 article in The Guardian:


"...introduced me on the shop floor to Christopher and Richard Jewitt, the father and son who own Footprint Tools, a Sheffield company that has been making hand tools for the building industry since the 1870s – and making them by hand, which is the kind of hard, repetitive labour that few among a younger generation can be found willing to do. The company also faced the competition from imports that has destroyed so much of Sheffield’s cutlery industry. At its peak, Footprint employed 400 people; it now employs 12. The Jewitts took their problem to the AMRC, who set them up with a young robotics engineer who is devising a program that will give a robot the equivalent of the subtle hand movements that presently shape one of their products (the Jewitts would prefer me not to name it, to gain what competitive advantage they can). “We’ve got to embrace the technology that’s out there,” said the senior Jewitt, adding that Germany could offer good prices because it had done exactly that."

Below, several other older Footprint tools in my shop: