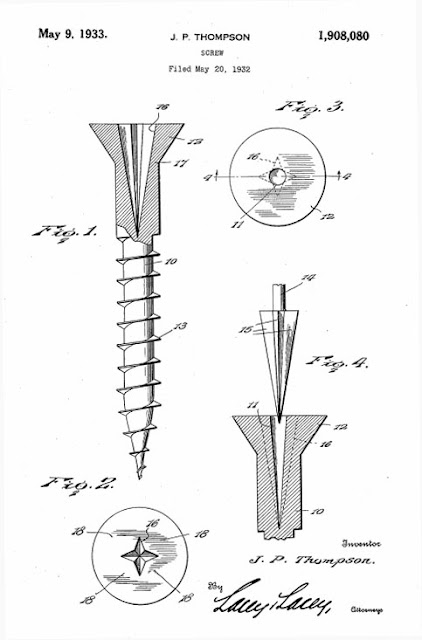 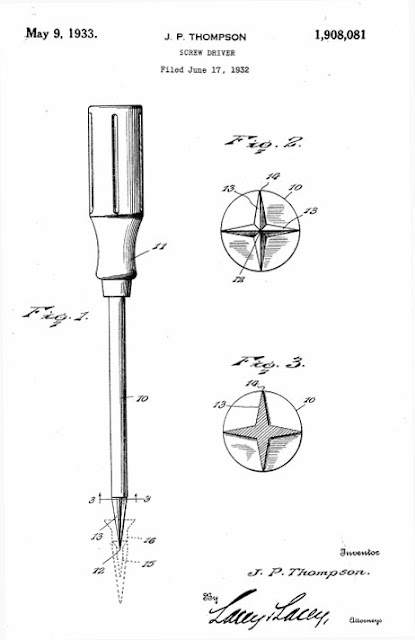 The Phillips cross-head screw was originally the brainchild of John P. Thompson of Oregon.  The X-shape of the slot and pointed tip of the Phillips head screwdriver made the driver self-centering and unlikely to slip out when it wasn’t supposed to. The recessed slot was shallow enough, though, that the driver did pop out when the screw was fully tightened, which prevented over-torquing and damage to the screw, the driver and the product being assembled. As such, it had great potential for the air-driven fastening tools then being introduced into automotive assembly lines. Thompson took out a U.S. patent in 1933 and over the next six months Thompson approached many screw manufacturers, all of which said his screw was impossible to reproduce because the punch needed to create the recess would destroy the screw head. Thompson decided the whole idea was not manufacturable until he revealed his idea to a Portland acquaintance named Henry Frank Phillips who became intrigued with the idea and offered to buy the rights to the patent. In 1934, he approached the American Screw Company of Providence, Rhode Island, the oldest (founded 1837) and largest screw manufacturer in North America where a new president named Eugene Clark had taken over. Clark was captivated by the design despite his engineers' reservations. By 1936, after some significant modifications by Henry Phillips (U.S. Patent #2,046,343, U.S. Patents #2,046,837 to 2,046,840) American Screw agreed to underwrite the development of a cold form process to produce cruciform screws.  Eugene Clark said, “I finally told my head men that I would put on pension all who insisted it could not be done.” 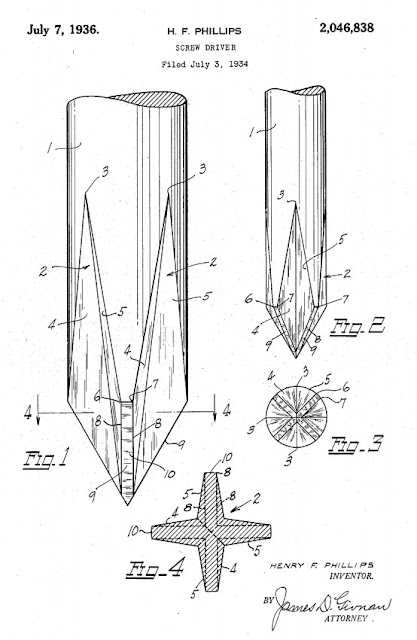 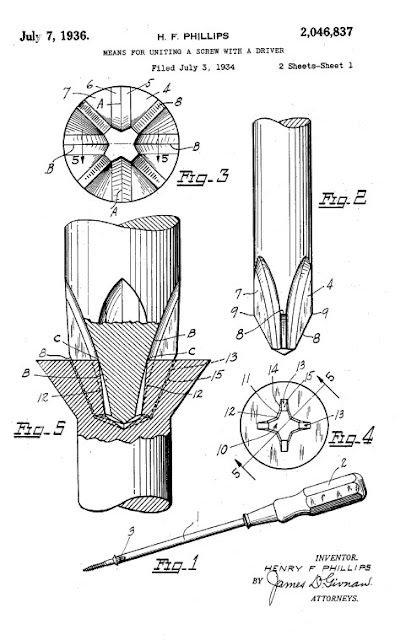 Below, the Canadian patent:

In 1935, with the financial backing of Jantzen Knitting Mills of Portland (which made bathing suits!), Phillips formed the Phillips Screw Company of Wilmington, Delaware, not to make the screwdrivers but to sell licenses. 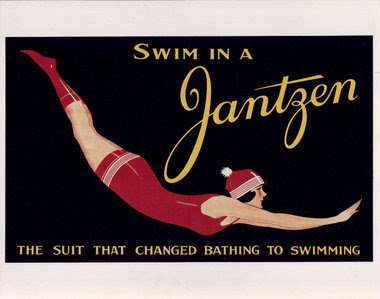 Phillips succeeded in bringing the design to industrial manufacturing and promoting its rapid adoption as a machine screw standard. One of the first customers was General Motors who used the innovative design in 1936 for its Cadillac assembly-lines. By 1940, 85% of U.S. screw manufacturers had a license for the design. Due to failing health, Phillips retired in 1945. He died in 1958.  By the mid-1960's, when the Phillips patents expired, there were more than 160 domestic and 80 foreign licensees.

Phillips was not the first cruciform recessed screw: that honour for that invention belongs to John Frearson, a Birmingham manufacturer, inventor and engineer who designed this screw type in the mid-1800's.  The Frearson screw had a steeper, sharper point and flat rather than tapered edges than the later Phillips design, which better resisted cam-out.  The Frearson screw was manufactured in the U.S. by the Reed and Prince Company of Worcester, Massachesetts, an old American company which was the first to manufacture cold-formed wing nuts.  The “Reed and Prince” screw found favour with boat-builders and air frame makers.  The company filed for bankruptcy in the 1980's, and their historic factory was demolished to make room for a Price Chopper.

There had been another precedent in 1908, when Canadian Peter L. Robertson of Milton, Ontario patented the “first recess-drive type fastener practical for production usage,” a recessed square-drive screw that bears his name. Robertson screws became a standard in Canada and gained a buzz in the U.S. when the Ford Motor Company, one of Robertson's first customers, used over seven hundred of them on each Model T, saving two hours of assembly time per vehicle.  However, Robertson had been burned in a licensing agreement he had signed in England, and refused to enter into another with Ford, so the use of these screws ended up restricted to the Canadian division of the Ford Motor Co.  The last Robertson patent expired in 1964 and the company is still a going concern. We're still very attached to them up here, especially on wood screws where their driving properties are excellent. 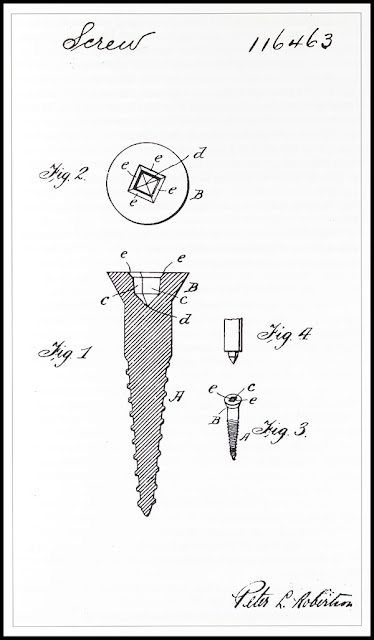 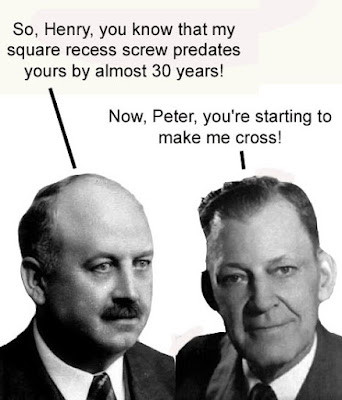 From what I can find on some of the old Phillips screwdrivers in my shop, Phillips issued licenses individually to different makers.  I've seen Lic. 1 on Stanleys and M. Klein & Sons, Lic. 2 on Apex or Stelco screwdrivers, Lic. 6 on Vlchek, Lic. 7 on the Bridgeport Hardware Manufacturing Co. blades, and Lic. 9 on VACO screwdrivers.

Below, License 1 issued to Stanley: 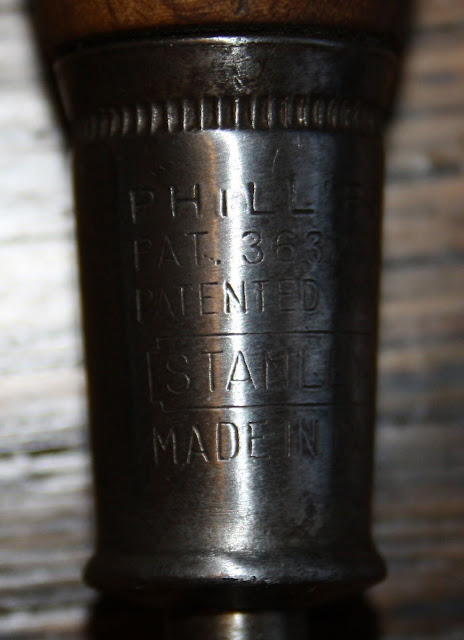 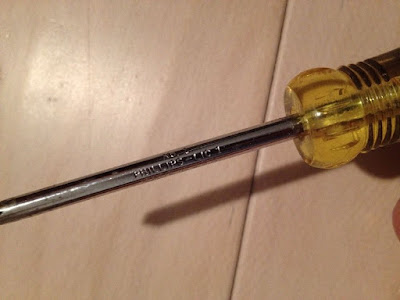 Vlchek out of Cleveland, Ohio got License 6: 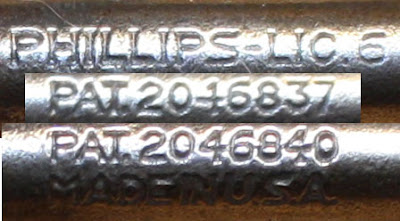 Below, License 7 on a Bridgeport stubby:

From a Canadian-made Cluthé screwdriver, blade courtesy of Bridgeport:

From a No. 1 Point on a Bridgeport WA-6 screwdriver, with a later patent number:

I can't personally say that I like the Phillips recessed screw, as it is far too prone to cam out and to stripping the head of the fastener: 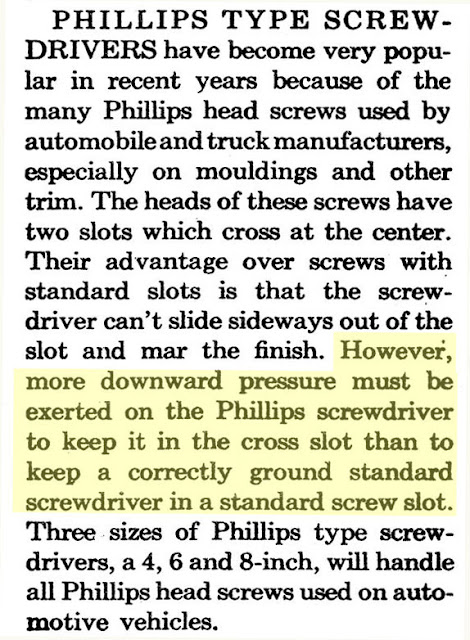 To address this problem (and to deal with the fact that Phillips patents were running out), the Phillips Screw Company and the American Screw Company jointly developed the "Posidriv" system in the 1960's.

Working on a 1960 Chevy Corvair and have run into several clutch-head screws. Was unaware GM used such fasteners at the time. Curious when the practice began.
Now, where are my clutch-head drivers? Grrr.

My aunt's husband was born in 1898 and raised in Albany, Oregon. So he was in high school around 1911-1916. He was firmly convinced that one of his high school shop teachers had later invented the Phillips screw. Looking into the backgrounds of Phillips, and of Thompson the credited inventor, I can't find any Albany, Oregon connections for either one of them, although they both lived in Portland at the time of the patent filings. I wonder if anyone out there is aware of an Albany connection for either one of them?

Roberston hardware is still used a lot in mobile home construction. I'm rather surprised that GM adopted Phillips head fasteners so late, just a few years before WW2. Speaking of which, did Phillips license to European manufacturers, or did they come up with something similar on their own? I'd just assumed that phillips head screws were ubiquitous by the mid 1920's.

A third technique you can try is using a manual screwdriver bit. This technique involves getting very wet, using your hands to hold the bit in front of the shaft and then biting down on the screwdriver's teeth. If you want to know more about stripped screws, you can find its details on nevrstripscrews.

Who owns the Patent of the Frearson screw drive?